Leaving Utica, iI saw two lady bikers leaving a gas station. I waved, but I don't think they saw me. A few miles later, the gathering clouds started showing up in drops on my face shield, and I pulled over to put on rain gear. The two ladies pulled in beside me for the same purpose, and we introduced ourselves. I told them where I was going, and the blonde one said, "On a Suzuki?!" like she thought it was impossible. They were Harley riders.

This sight means it's time to batten down the hatches... 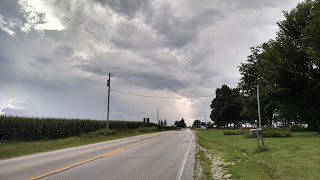 They took off while I was still tarping up my packs, and I rode into the rain alone. 57 miles later, I stopped for gas, and there they were again. I wasn't surprised, as we were all headed to the Quad Cities. They asked why I was taking the back roads, and I said it was prettier. I should've asked why they were taking the freeway. They inquired about my gas mileage, and I said 33-40 depending on what kind of riding I'm doing. Robin, on the pink Harley, said she got over 45. I asked how many cylinders, since two get better milage than my four, and her response was, "Shit if I know!" and a big grin. We shared a laugh, and then they rode away with a "see you on the road" from Pam and a "see you on Facebook" from Robin. True to her word, I received a friend request last night. 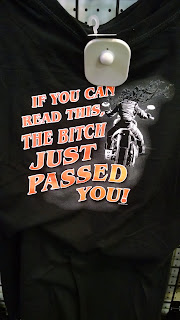 Route 6 closed and forced me onto I80, where I immediately got stuck in traffic. Still wearing rain gear but now sitting still on a hot bike in the sun, I quickly decided this was a terrible plan. I stopped under an overpass to remove my rain jacket, then got in the breakdown lane and headed for the next exit. I found myself in Moline, one of the Quad Cities, and stopped to remove my rain pants as well. Toodling around town, I found myself so hot and sweaty I actually removed my leather. And I was still sweating.

At Rites of Passage on 15th Ave., I got my lip pierced, for less than half of what it would have cost back home. When i told the guys that, they said, "Dude, I need to move." Before I left, they came out to see my bike; one of them grew up with Harleys, and I exchanged "I don't know anything about Harleys" for "I don't know anything about Jap bikes." I told him they're worth knowing.

With the interstate a parking lot, I took their directions over Rock Island on route 61. I had to sit for a while to get over the island, and idling over the bridge gave me enough time to take photos and to name the bike. She is now Hades, as in "hotter than." 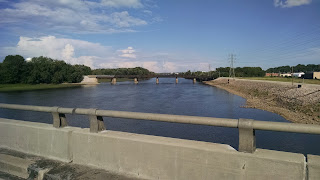 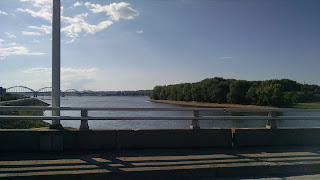 I headed for Iowa City, then took 1 North to 30 West. Iowa is not the boring wasteland I feared- in fact, it's gorgeous. I wasted some time talking wrong turns around Cedar Rapids, and then following signs for a nature preserve that I mistook for the state park. I got to watch the sun set from Palisades, and my camera did its usual poor interpretation of beautiful colors. This was actually fuchsia. 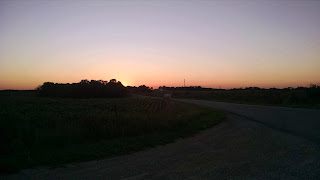 This morning, I awoke to beautiful weather. I headed into town to get coffee and do some blogging, and now it's off to Brucemore.
Posted by Skipper at 12:08