On my way out of Austin on Monday morning, I took a large chunk of something to the chest. A fleeting glimpse of blue and white and the fact that it left a big powdery white mark on my shirt tell me it may have been a bird, but when I looked down, I found a rock in my lap. Maybe it was a bird carrying a rock? A bird that was stuck by a rock and then fell into me? I'll never know, but I know it hurt.

I took the interstate to Dallas, more interested in making time to see my friend Randy than in seeing every tree between the two cities. On the outskirts of the city, the bike started to jerk and slow, and I took an exit. The ramp was uphill and the engine died halfway up, but I had enough momentum to coast into the parking lot of a towing company. I didn't make it into a parking space, but at least I was off the freeway.

With the seat and a side cover off, I was able to see that there was fuel in the inline filter, and a fold in the hose above it. After unfolding the hose, Hades started again. I set off toward Randy's house, and made it another couple of miles before Hades stopped again, this time in the parking lot of an auto parts store. (At least she has excellent timing.) I bought a couple of feet of fuel hose and set off once more, this time leaving the side cover in my luggage to give the hose as much room as possible to do what it wanted. The fuel light came on, and I was perplexed for a moment before deciding that the pressure buildup between the pump and the kink must have caused a leak. She died a third time, and I put her on reserve and rolled up to a gas station.

It was then that I thought back on my last stop for gas. I remembered pulling up to the pump, resetting the trip meter, chatting with a woman selling vehicle cleaning products, going inside, getting a bottle of water and a banana, eating the banana...and leaving. I hadn't put gas in the tank.

I filled up the tank, replaced the side cover, tucked the spare hose away in my bag, and made a mental note never to reset the trip meter before getting gas.

Randy introduced me to his cat menagerie and then took me to lunch at a Mexican-Asian fusion restaurant. We talked a lot about comics and cats and a little about a lot of other things. 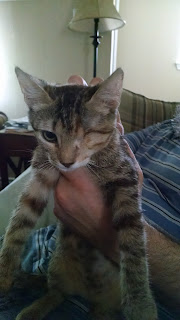 When his wife got home, I realized how late it was and gave her a nice-to-meet-you-I've-gotta-go-now hug, and got back on the road.

I passed another lady biker on the highway and waved. She had a Barbie-pink crotch rocket, with a matching helmet that had a raccoon tail hanging off of each side. She fell in behind me and tailed me for about thirty miles, until I got off in Tyler. I turned north, trying to track down a campground on my map. I'd gone a couple of miles when I realized I must have taken the wrong exit. I stopped on the side of the road and waved at the traffic behind me to go around, but a white pickup truck pulled in behind me.

"I'm sorry," I said to the driver as he got out, "Were you trying to turn here?" I gestured at the parking lot beside me.

"No no," he said. "We've been following you. We're looking for food. You ride better than most guys I know!"

I laughed, thanked him, and went through the process of replacing my sun goggles with my clear goggles while he talked. He introduced himself as Gypsy and offered to buy me dinner. Since I try to avoid cooking in the dark, and it looked like I'd be setting up camp after sunset again, I agreed and followed him back to the highway.

The only game in town was a McD's, so I had a salad. Gypsy and his friend had picked up the brand-new truck in Texas and were on their way back home to New Orleans. We exchanged phone numbers so we can go riding if I ever get down that way.

Significantly after dark I finally found myself in Tyler State Park, choosing a campsite. There was a place to park, a picnic table, a fire pit, and a pole I couldn't explain with two creepy-looking meat hooks on it. I tried not to look at it and pitched my tent as fast as possible, skipping the annoyance of removing the sleeping bad from my luggage and inflating it. I debated about the rain fly and finally decided to put it on but leave the front open. 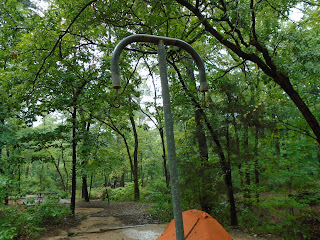 And thank god for that. I slept horribly, and it wasn't quite dawn when I was awakened by a great boom of thunder.

"Oh, here we go," I said to myself, and leaped out of the tent to finish staking out the fly and make sure everything on the bike was covered. I debated packing up quickly and running for it, but Tami had warned me that the usual lack of rain in Texas makes the roads shockingly hazardous when they do get wet, so I decided I'd be better off hunkering down and waiting it out.

A ranger came by a few minutes later to give me a campground pass, and warned me there were bad storms coming. I felt like saying I had noticed, but he was kind, so I stowed the sarcasm. I counted the storm in, enumerating the seconds between lightning and thunder, until the sky opened up.

The tent area was a sand pit, which had fortunately made staking quite an easy task, but it turned into a riverbed when the water came down. It poured and rumbled and flashed, and I alternately read a book and mopped out the corners of the tent with a bandanna. A couple of hours later, the monsoon had passed and I'd stayed remarkably dry. The tent gets two thumbs up.
Posted by Skipper at 15:57