Repacking after the storm involved washing the sand off the tent, the fly, and my boots under the camp spigot. The tent and fly went into the luggage wet, because there was no other option. I attempted to take a shower but found the shower house closed. 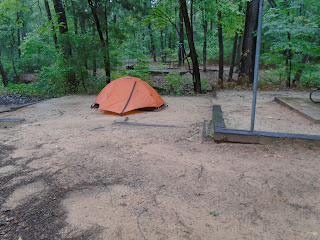 My boots had been protected in the vestibule of the tent, but all the splashing had doused them thoroughly anyway. Fortunately the insides were merely a little bit sandy, nothing worse. 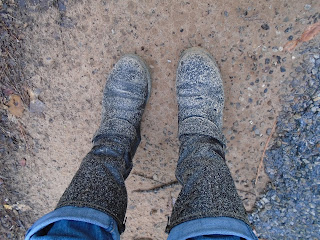 From Tyler, I took I20 into Shreveport, Louisiana, where I stopped to buy a long-sleeved button-down shirt, on Gypsy's advice. No one down here rides with a jacket, because it's too damn hot, but riding in a tank top means you get sunburned and sandblasted. TJ Maxx had a lightweight blue-and-white plaid shirt that was exactly what I wanted.

I got back on state routes after that, headed south toward Alexandria. It was a different small-town scene than what I'd been through in other states. All the town had gas stations, but two out of every three were closed, long-dead relics being taken over by woods or used as parking lots. Most of the buildings were broken and empty, and most of the people were wandering aimlessly along the roadsides, some of them pedaling ancient bicycles.

In Clarence, I took 84 east into the Kisatchie National Forest. I actually bypassed the campground and found myself in Winnfield, got a tank of gas and a drink, then turned around and went back to the ranger station. The rangers were gone for the day, but the campground was open. I felt triumphant at having managed to get a campsite while there was still daylight, and set up my tent to dry. 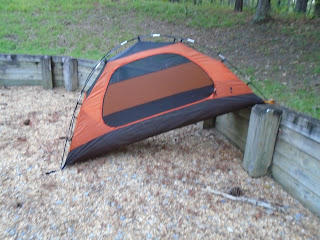 It turns out the creepy meat-hooks are actually lantern holders, but they work as rain-fly-dryers too. 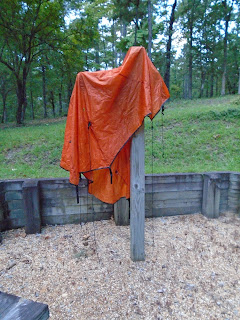 I realized pretty quickly that this campsite, while beautiful, had no running water. I asked the only other occupant, a man with a van and a trailer, if he knew of a water source. There was one on his site, and he welcomed me and my empty bottles. He told me there were two more somewhere on the campground, but a couple of searches didn't reveal them to me. I poured out the awful canned "hurricane" drink I'd bought in Winnfield, ate my boxed mac 'n' cheese, and slept with the fly off the tent under a gorgeous starry sky.
Posted by Skipper at 16:12