In Tupelo, I exited the Trace to find lunch and a library. I ate at a Waffle House for the first time ever - they're one of those famous names I've never experienced because they keep their business out of New England. It was...waffle. No really, the food was pretty bad. At least the servers were friendly, but it wasn't any better than the "free hot breakfast!" at the hotel in Vegas.

At the Trace Visitor Center, I made a stop on the recommendation of a park employee. I parked behind a pair of motorcycles and greeted the riders, a pair of gentlemen from Tennessee who were taking a week to jaunt around the area. They recommended I make time to do the Blue Ridge Parkway, and then the younger one asked if I would mind a prayer for the trip. I said I wouldn't mind at all.

"Father?" he prompted the older man, and we removed our various hats and goggles and bowed our heads. He said a nice prayer for safety, drivers paying attention, and no deer in the road, and we finished with an amen.

As I replaced my goggles, the first man asked me, "So have you been saved? Are you a Christian?" I'd known this was going to happen - you can't expect to visit the South and not have someone try to save your soul - but I didn't expect it from a pair of bikers.

"I don't have a denomination," I answered.

"You should think about it," he told me, while Father nodded in agreement. "Someday we are going to be judged."

I told him I would think on it and bid them a good day. 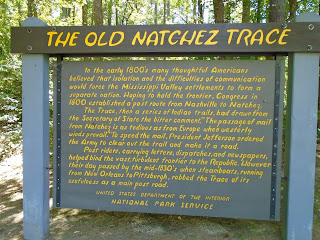 Let me say before I tell this next story that if you're wondering why I got myself into this situation, it's because I'm determined to say "yes" to the opportunity of random experiences on the road, rather than cutting myself off, talking to no one, and potentially missing out on awesome new things. Not all new things will be awesome, but you can't ever know in advance.

Late in the afternoon, I made a brief stop at one of the Indian Mounds sites. 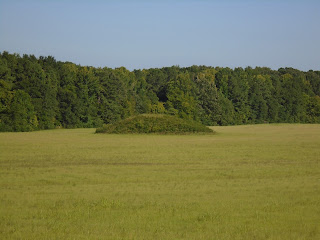 I chatted with another traveler, who recommended I visit Memphis, and then left. I had my earplugs in and was getting back on the bike when someone else addressed me and asked where I was going. I removed the ears, returned to standing, and answered. He offered me a bottle of water, which I refused because I had no more room for keeping such things. Then he offered again, and again, until I finally took it to put him out of his misery. When I told him which campground I was looking for, he offered to show me another, better one, and I accepted. At least I couldn't get lost if I was following him.

I said that I did, although not well, and I'd be happy to go play a game with him.

At the Piney Grove campground, run by the Army Corps of Engineers, the guy whose name may have been Tony hung around while I reserved a spot. I made note that he could well be making note of all the information I gave to the campground host, including my full name, home address, and phone number. Tony requested that I be given a site by the water, then accompanied me to my assigned site to look around. I refused to set up my tent, since I don't leave things around and then wander off. He argued that they were perfectly safe, and I said they were staying on the bike and we should go play pool.

He asked if I was hungry, and I said yes, and then I asked where there was pool, because weren't we in the middle of nowhere? He told me the table was in his house, which was nearby, and I paused and thought about it. The ways in which this could go badly were so obvious, but he seemed like he just wanted to help, so I decided to take a flyer. I said I'd follow him to his house, and he said he could drive, and I said no way. The bike comes with me. I didn't want to be at his mercy when I decided it was time to take my leave. He looked at me like I was a little nuts, and in response I started my engine. On the way out of the main gate, I stopped to tell the guard that if I wasn't back by 10, when they closed the gate, that he should call the cops.

Tony's house was nearby, also on the lake, and I was relieved to find it in a neighborhood and not alone in the woods. I parked the bike behind his truck, snuck my pepper spray into my pocket with my phone, made sure my knife was secure in my other pocket, and followed him inside.

He made hamburgers, and we watched the news and chatted while we ate them. He had an ex wife and two grown children and lived alone with three dogs. After dinner, he made mixed drinks of Gatorade and vodka, and we played pool.

After eight games, we were tied, and he wanted to bet on the tiebreaker. The eyebrow he raised when I asked what we were betting told me it would soon be time to leave.

"Let's start with a hug and see what happens." I gave him a bro-style hug, complete with a violent sportsmanlike pat on the back. We played, I lost, and he told me how beautiful I was. I said it was time to leave and thanked him for dinner. He went for another hug and tried to turn it into a makeout, and I presented him my cheek and then pushed him away. He resisted until I pushed harder.

"You've made up your mind, then," he said with a questioning inflection.

"Yes. Good night. Thank you for a nice evening." We stepped out, he pointed the way around the cul-de-sac so I could turn around, and I left.

On my way back into camp, I stopped at the guard hut and told the man I was back safely. He bid me a good night and I went to set up my camp.

My tent was uprighted and I was inserting the sleeping pad into it when I saw a black pickup come down the lane and then pull into my drive. I grabbed the mace, which was still on me, and got ready for the worst.

"Don't freak out," Tony said, hopping out of the cab and opening the tailgate. "I just came to bring you firewood." I wanted to tell him where he could stick his firewood, but I conjured a few more moments of patience and kept an eye on him while he unloaded it. When he tried to light a fire, I stopped him, saying I'd prefer to have it in the morning.

"I was hoping to light it for you," he said, sounding somewhat put out, and I stopped just short of telling him I'm a fucking fire performer and I can light my own fucking fire. He didn't need to know anything else about me, particularly anything he might find interesting.

"Do you want to stay at my house tonight?" he asked, and I almost smacked him. "No expectations, I just thought you might like a real bed and some air conditioning."

Dude, I've paid for my site, my tent is waiting for me, and it's seventy fucking degrees outside.

"I prefer camping," I said, and he threw up his hands and left.

Alone in the dark, my paranoia decided he was going to get his boat and come sneak up on my dock when he thought I was asleep. I made sure my tent was at a good angle for visibility, left the fly off for more of the same, and slept with my mace and knife, after texting his license plate number to Abel and Sheila.

Fortunately, a beautiful morning arrived without incident, proving that he was just awkward and not actually malicious. It took me several hours to scrub out the annoyance he left in my head, though. The Trace is peaceful driving, which is great if you want to be alone with your thoughts, and not very helpful if you're hoping for a distraction. 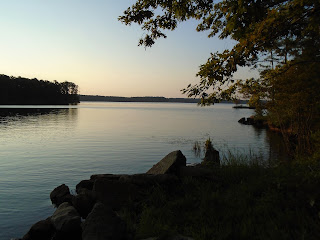