The insanity of the night before had at least served the purpose of shortening my drive to Kyle the next day. I slept until 8 (it counts as sleeping in when you've been getting up at dawn) and headed off on 87. I got lunch at a passable Italian restaurant in Brady, removed my jacket shortly thereafter as the Texas heat was starting to make itself known, and then stopped in Fredricksburg at a winery. I did a tasting, picked up a bottle for Tami, and then moved on.

The road east out of Fredricksburg has more wineries than I've ever seen in one place - those and peach orchards. I'd love to come back and see them all, but with sixty miles left to go on two wheels, yesterday was not the time. When I saw this one, however, I actually pulled a U-turn in the middle of the road and went back. 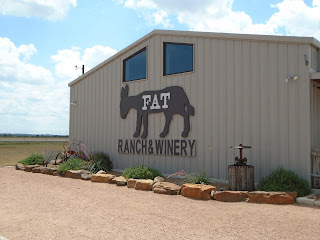 They were doing a tasting of their seasonal peach wine. A shot of wine came with a shot glass, so you know what's tucked in my tank bag now. 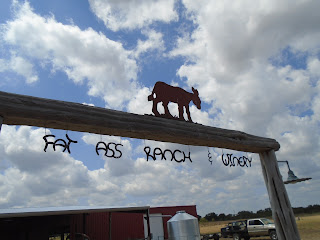 At a gas station in Kyle, I pulled out the old flip phone and tried to get its GPS working, but it said no. So I went inside and asked around. Nobody had heard of the street I was looking for, but one employee was kind enough to pull out his GPS and write down the directions for me. I found Tami's house without trouble, and was happy to end the day's riding with a hug from an old friend.

We spent a while catching up, then went to Black's for some good ol' Texas BBQ. It was as good as promised ("meat" jokes welcome). Then we went to Gruene (pronounced "green") Hall for a concert featuring Holly Williams, granddaughter of Hank Williams, and Hayes Carll. 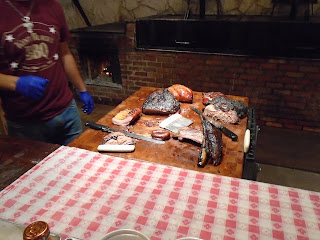 Tami and I found spaces near the front, and were enjoying the music and dancing when a very tan girl with an ancient bleach job, too much perfume, and an enormous leather purse squeezed in front of us. She danced in front of Tami for a few minutes, then scooted in front of me. I stuck out my thumb and let her poke herself several times, but she didn't seem to notice or care. Then she stepped back and caused me to spill half of my sangria on my own feet. She didn't notice that either.

When the guy next to us eventually tapped her on the shoulder and asked her to please stop hitting Tami with her purse, she gave us a big fake smile and an "Oh, sorreeeee!" When she turned around again, I dumped the rest of my sangria in her giant purse.
Posted by Skipper at 12:20