I haven't owned a car since February of 2015, when I sold my Audi A4 and started sharing my boyfriend's Saturn wagon. That arrangement worked well until we broke up in June of 2016, and I took my odd stable of motorcycles and went on my way.

My intention was to buy a cheap shitbox of a car when the weather got too cold to ride. Then Rogue and I decided to leave town, and the purchase of a car became an unnecessary burden, especially once I moved in with Rogue and started sharing her car. That was short-lived, ending the night the car left me in the middle of no-cell-ville New Hampshire and I hitch-hiked to my office and borrowed a work truck to get home. Gypsy, the itsy-bitsy blue convertible, came back to life just long enough for the mechanic to tell us she worked (and was clearly possessed), then promptly stranded Rogue in downtown Northampton. Thus we became a no-car household in November in Massachusetts, hearing predictions for a particularly cold and snowy winter. 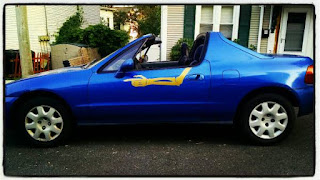 The business of being a winter biker has been a one-day-at-a-time lifestyle, culling unnecessary commitments from our schedules and accepting that our plans will change with the weather. All of my plans now have a snow clause: if it snows, the plans are cancelled.

I hate the cold, which is a large part of the reason I'm heading south for the winter, but I've surprised myself with my ability to withstand it so far. I have a heated vest, a TourMaster Synergy 2.0 that I purchased used on eBay, with a matching set of heated glove liners that work when they feel like it. (I heard a rumor I'm getting heat grips for Christmas...stay tuned.)

My layering system has stratified by temperature.
70° and up Cotton leggings, tank top, Scorpion armored suit, boots, light gloves, helmet
60°-70° Add the wind liners to the armored suit, replace the leggings with jeans
50°-60° Add a light-weight wool sweater or zip-up hoodie under the jacket
40°-50° Add fleece-lined leggings under the jeans, a vest over the sweater, and get out the heavy gloves
30°-40° Add the heated vest, wool ski socks, and a scarf, face fleece, or balaclava
15°-30° Add the rain suit on top of the above, and the heated glove liners if I'm going more than 20 miles
15° and down Find a cage or cancel plans.

What's the coldest weather you're willing to ride in? Have you ever gotten caught in something too cool for school? What are your favorite tricks for staying warm?
Posted by Skipper at 12:08 No comments:

These Boots Were Made for Failing

My old faithful boots that I bought from my mom's housemate last year are finally starting to give in. The padding in the ankle has fallen out in chunks, and the top and bottom of the sole are peeling away from each other. They don't even pretend to be waterproof anymore, no matter how recently I've oiled them. I love them to death and they're the comfiest pair of boots I've ever owned, but I think it's time.

So I did some research and bought a pair of O'Neal Rider motocross boots. The reviews said they run a little small, so buy a size up; I bought a men's 8, since I should be a men's 7, and they fit perfectly. The reviews also said they were a little stiff at first but would loosen up fast. 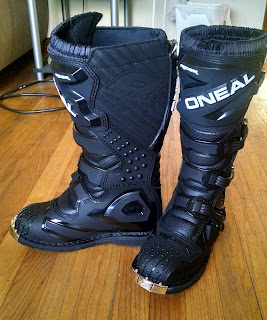 I don't care how fast they loosen up; I can't use them. Made suspicious by how hard it was to walk in them, I went and sat on the bike before actually going for a ride and just tried to operate the shifter and foot brake. I couldn't. It was completely impossible to even touch either lever. I opened a return order for these this morning. They look good, but damn, they're useless.

What are your favorite riding boots? Have you ever had a pair that just didn't do what you needed them to?
Posted by Skipper at 14:21 No comments:

On Biking and Back Pain

My back problems began when I was 18 and working in a kitchen, spending long shifts on my feet. One day I reached into the trunk of my car for something and then couldn't stand up again for the excruciating pain in my lumbar spine. After a few days it mysteriously disappeared, and that pattern has continued for the 10+ years since. A few times a year my back will suddenly decide that it hates me, and I'll spend five to ten days bent over and only semi-mobile, and then things return to normal.

In March of 2016 I experienced an episode that was markedly worse than all the others, lasting nearly two weeks and with the pain spreading down my right leg. Concerned, I got an MRI referral, and learned that I have a herniated disc at L5-S1. I started physical therapy, and though the acute pain disappeared, a new problem cropped up: constant spasms in my erector spinae muscles, particularly on the right side.

In July, which was two or three months into PT, I went on the road with Cider, destination Colorado. Kim, my PTA, raised an eyebrow when I told her my plan and said, "Well, that'll be a test of your back." I knew it was probably going to hurt, but I went anyway. Kim gave me some stretches to do at red lights and gas stops, and I did them religiously. They helped. In fact, when I returned home, I felt better than ever.

Then I returned Cider's bike and got back on my old cruiser, and the pain immediately reappeared. Guess I found the problem. The slightly hunched-over position caused by riding with my feet out in front of me was enough to severely irritate my back. I had no car and no plans to buy one, so I bought a new bike and lent the cruiser to Rogue.

After another month or so, the doctor overseeing my treatment told me that if PT hadn't helped by then, it wasn't going to, and set me free. We did seem to have reached a plateau of effectiveness, so I took my irritating spinal spasms and went on my way (meaning, of course, I went on the road).

I also bought a book called Treat Your Own Back, by Robin MacKenzie. I no longer remember who recommended it to me, but they were adament that it was pure gold in paper form, so I spent the $12 and hoped for the best.

I'll say now that it may be the best $12 I ever spent. The muscular spasms are still a mystery, but when I tweaked my back walking Bee out of a garage the day before Thanksgiving and the disc pain reappeared, I immediately starting doing the things recommended by the book, and it worked. The movements were like the ones Kim had given me, but the book included a more thorough explanation of the reasons for the stretches, and also specified movements that I should NOT do, something I'd never been told. 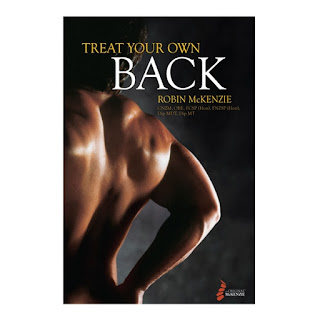 I spent Thanksgiving on my feet in the kitchen, alternating with stretching on the floor, and being very cautious with the types of movements I made. The pain hovered at a tolerable level, threatening but never blooming into the awful dysfunction that had me confined to the couch and taking percocet for two weeks last spring. By the next morning, I was convinced that I could keep it at bay indefinitely. That was mind-blowing.

Two days after that I started a new job, working overnights in a warehouse where my entire job was to lift and move boxes and occasionally push carts. At the end of the first shift, my back hurt, but it didn't hurt any more than my feet or my knees. Two days later, the mysterious end-of-pain arrived, and I was fine. I'd gotten through the acute phase and maintained my ability to do all my daily tasks, and I hadn't taken so much as an ibuprofen.

In future I'll make a post with some photos and examples of the exercises and an analysis of my riding position and how the muscle spasms affect my turns.
Posted by Skipper at 14:47 No comments: