When it came time to find my campsite for the night, I glanced at the map and discovered that the site I thought I was heading for wasn't a campsite at all. I'm not sure how I misread that, but a change of plans was clearly in progress. I exited at a sign for a state park, but couldn't find the camping. 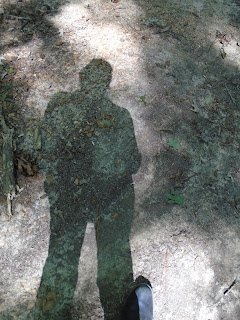 Pulling out my trusty atlas, I marked a campground and headed that way. The road went on a lot longer than I expected; following the Trace map had changed my sense of time in relation to paper. The sun went down and I still hadn't found camping. I attempted another campground and couldn't find that either. It was like someone had selected them all and pressed Delete.

I stopped for gas on 80, ate a couple of gas-station pizza pockets (yuck) and chatted with a retired man whose job in life was to watch people at the gas station and try to scare them into not stealing things. He told me where to find hotels on 35, and I took off again.

But I'd already hoteled it twice, and I didn't want to drop another $100 on sleeping, so I made one more attempt. After a quick stop to put oil in Hades, I went to start her up, and she coughed oil all over my knee. This is what happens when you're so focused on storing the oil bottle that you forget to replace the filler cap. I put it back, pulled out my GPS, compared it to the map, and rolled out of Forest to the south.

Mississippi roads are rather like rollercoasters. They're full of large bumps that will send you flying if you're not paying attention, and that's where I encountered the only road so far that has made me drive in the left lane to avoid the road surface in the right. My GPS died, and I wondered at the contents of that road sign I had just flown past. After a couple of minutes, I decided it was worth turning around to see, and that was the right move - at 9:30pm, I finally rolled into Marathon Lake Recreation Area. It was deserted, and it had running water and a bathhouse with electric lights. Sometimes a little more determination is all you need.

The next morning, I awoke to a beautiful view of the lake. 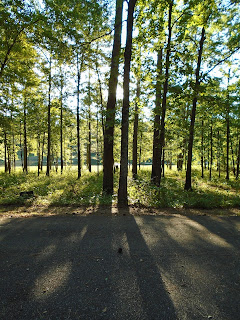 I'd gone many miles out of my way to find the lake, so I headed north and caught back up with the Trace in Kosciusko. At a stop in one of the Trace's many pullouts, I noticed a butterfly that had been sucked into my radiator and was damaged but still alive. Unfortunately I don't think it lived long after this, but I put it in a sunny patch on the grass and left it in peace. 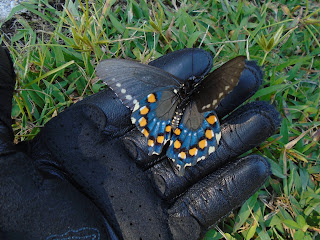