I spent a wonderful Friday night and Saturday morning with cousin Carl, his wife Alisia, and their little daughter Viv. We went to a hot dog joint in Pittsburgh and had delightfully awful food, fries covered in cheese and bacon and dogs with accessories.

On Saturday morning, Carl painted Viv's face in preparation to go to a comic con. Then she helped me get ready, and I took off west again. 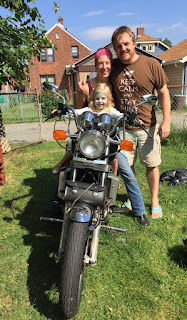 Leaving Pittsburgh was difficult. I found 376 without trouble, then saw a sign that said "expect delays" and exited immediately. Idling in a parking lot studying my map, I was approached by a man named Stu, who wore a spectacularly bushy grey mustache. His truck was broken down and while he waited for a tow, he explained the best way out and wished me luck.

Unfortunately his suggested route was also full of construction, so I grabbed a random road and decided to keep the sun on my left until I found another westbound highway.

That worked out, and eventually the signs said I was 6 miles from the state line. Ohio, ho!

... And then I entered West Virginia. Certain enough of my map reading to keep going, I drove on through tiny, dusty towns that apparently contained nothing but auto shops. Eventually I entered Ohio and felt triumphant that I hadn't, in fact, completely failed at navigation. I stopped at a farmstand for peaches. 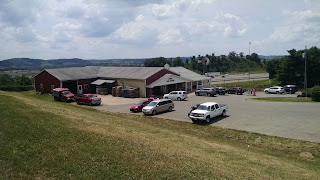 Eventually I did miss a road sign, but the wrong turn was the right choice. To all bikers, I highly recommend Ohio 209. It's hilly and curvy, like riding a rollercoaster through beautiful farmland. One hill was even sharp enough to give me butterflies in my stomach. 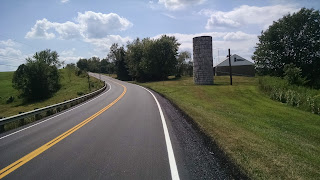 Here is a building that looks like a giant basket. I can tell you no more about it, except that it says Longaberger on the front. 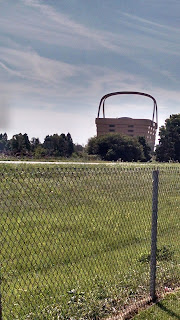 And here is the fire department in the town of... There are so many jokes, I can't pick just one. 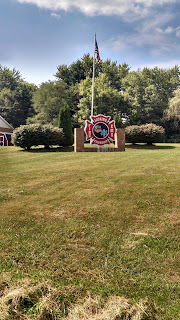 Realizing I was getting tired and starting to do stupid things, like attempting to turn around in a small space at the fire department and nearly dumping the bike, I pulled off when I saw a sign for a scenic overlook.

Of all the sights I've seen in the last few days, this was about the least scenic. There was a roundabout, a shelter occupied by a gathering of people who all seemed to know each other (family reunion?) and some grass. No shade, and it was hotter than hell. I say on the grass, ate a peach, took a photo of the least scenic not-overlooking-anything ever, and left. Unfortunately the photo disappeared, but you're not missing much.

Some miles farther on, decidedly unrefreshed by the scenic overlook, I stopped for gas and a break. As I was considering gearing up again, a man and his wife pulled in on a Honda Goldwing. I approached and asked where they were from, and we chatted until a pair of guys approached me and asked about the Madura.

"You know the Madura!" I said, surprised. My bike is a weird, rare cult classic that most bikers have never encountered. These two, however, were former Madura owners themselves, and they told me never to sell it because they regretted getting rid of theirs. We talked bikes for quite a while, and then they left and I set out again.

I camped for the night at Indian Lake State Park in Avondale, OH. It was one of those "camp" sites to which people drive their brand-new RVs 40 miles and "camp" for the night with all the luxuries of home. It's fun, and it's better than never leaving home at all, but camping it is not. 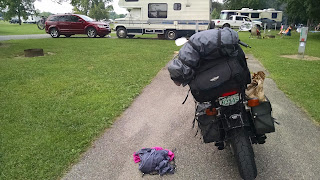 On the bright side, my neighbors were super friendly and I joined them at their fire for s'mores and chatting. There were two couples, one retired and one with the husband a year from retirement. While I was packing up this morning, they gave me coffee. And then I set my picnic table on fire.

There are not pictures. Fortunately the picnic table was made of something heavily treated, so after the white gas I'd spilled burned away, the table was fine. I cooked my breakfast on the pavement after that.

P.S. apologies for the awful typesetting, the mistake pictures, and the typos - blogging from my phone is pretty difficult.
Posted by Skipper at 16:36