It wasn't long after that when I got a text from Frank, the guy from the boot store, saying he was on the second floor of the Honky Tonk. I found him at a table, his helmet beside him. 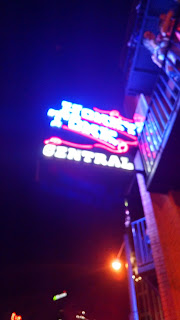 We ended up on the balcony, talking about bikes and travel and Nashville. I could see all of Broadway as well as the river, and I marveled at the energy and the scenery, explaining that I had never liked cities until that very afternoon. He suggested we go up to the roof of the Acme.

We made our way there, Frank pointing out various things along the way and talking about the boot stores. There was a man with an entire drum kit set up on the sidewalk, drumming and rapping.

"This guy raps about whatever he sees," Frank said, and held out his helmet as we walked past. I distinctly heard "man with a helmet" enter the song and grinned, impressed. There were two lone sax players a block apart from each other, a guitarist across the street, and a man on a corner drumming on a bucket.

At the Acme, we realized there was a cover charge for roof access and neither of us had cash. We hiked up to the parking garage so I could get my debit card and show off Hades. When I retrieved the card, I found it bent into a strange shape like it had melted. It definitely wasn't going to fit in an ATM slot, so we agreed to an exchange of roof access for a round of drinks. We spent a while at the bike, being nerdy bikers, before going back downtown. After making our way all the way through the line at the Acme again, we realized we could've just walked in, because we already had hand stamps.

There was a line for the roof, as well, but it didn't take long to get through. I followed Frank to a spot at the edge, overlooking Broadway, and was again overwhelmed at the amazing-ness of it all.

"This is my town," he said proudly.

"I can see why," I said. He told me all about his usual haunts, what brought him here, what made him stay, what he hoped to do. I shared my own stories of what I do and what I dream of doing. 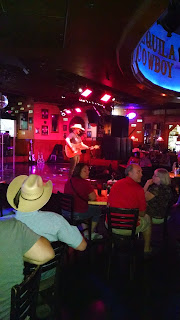 Having taken up at least our fair share of time at the railing, I shoved my way to the bar to get drinks, and then we took a seat on a couch by the access door. More talk of bikes, and boots, and music, and culture shock, and travel, until suddenly the lights came on and they booted us all out because somehow it was 3am.

"I think I trust you and you're not going to steal shit," he said. "So if you want a place to crash tonight, you're welcome at my house." I had no interest in hunting for a campsite at 3 in the morning. I took him up on it.

We bounced back up the street, dodging the drunken crowds and the puddle of vomit by the sidewalk. Frank got his bike and met me in the garage, where I looked it over and ogled it properly. He rides a V-star 650, black and in beautiful condition.

I followed him out of downtown and info a neighborhood a couple of miles away, where we parked in the street and entered a cute white house. His apartment was in the basement, and it was literally a "studio" apartment, because he had built a recording studio in it. He admonished me not to look at it because it wasn't finished, but it looked pretty good to me.

Having a real shower was wonderful. I'd considered dropping into a gym earlier to clean up, but decided I'd get sweaty in the bars anyway and didn't bother. When I came back, Frank was building a playlist on his TV. He gave me the controller so I could add to it, but after adding a few songs I pressed the wrong button and deleted the whole thing. I started a new one, but our ongoing music discussion made us keep starting new songs, and we gave up on the playlist.

We were sharing bands. "Have you heard of blah?" "No, put it on - oh this reminds me of xyz, do you know them?" "No, play that next." When I said I wasn't familiar with Steel Panther, he announced that we were going to go to sleep listening to them.

"You're going to wake up in the morning and wonder why you have all these weird lyrics in your head." We lay there for a while laughing at the ridiculousness - if you've never heard Steel Panther, look them up, as long as you're over 18 and not offended by raunchy music.

I woke up an hour later to the playlist still going, and started laughing all over again. Frank turned it off, and I may have gone back to sleep, but I'm not really sure. I know I slept less than two hours before it was time to go. 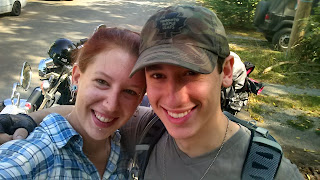