As soon as the storm cleared town, it was time to assess the damage and start putting it all back together. The dryer, oven, and one fridge had drowned, and there was a circuit out in the kitchen. Overall, though, it wasn't so bad. The house remained livable if a bit moldy, and everyone's vehicles survived. The dryer even fixed itself once it wasn't full of water anymore.

The first thing we did, after mopping the main floor a couple of times to get the dead frogs and roaches out, was help Scott clean out his gym. It had gotten just enough water to be gross but not enough to need renovation, so an afternoon of moving mats and gym equipment and mopping with bleach got the job done. 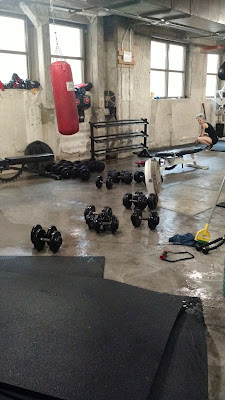 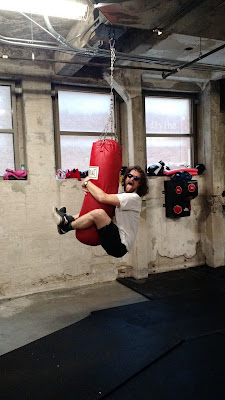 We didn't want to wait for a contractor to be available and demolition doesn't require much skill, so Rogue and I immediately started ripping out the bottom 18" of drywall and insulation from the first floor. The amount of mold we found indicated that this was not the first flood the house had experienced, although legend says it was by far the worst. Scott and I made an excursion to Home Depot to acquire cement board and drywalling supplies. 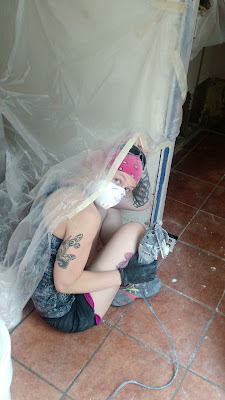 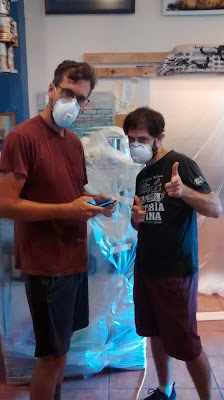 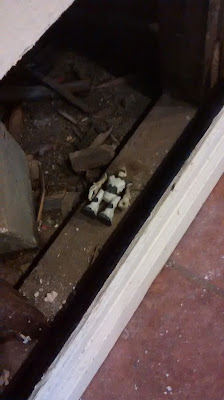 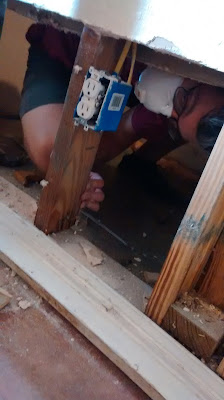 When that was done, we began a larger-scale demolition of bedroom 5, the room with the roof that we had tarped with marginal success. All of the drywall and insulation was removed from the walls and ceiling, and then we sprayed mold killer on the remaining structure. Danny, who had been trapped in Denver during the hurricane when the Houston airports closed, returned home and joined in on the messy fun. 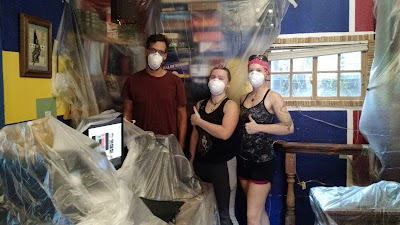 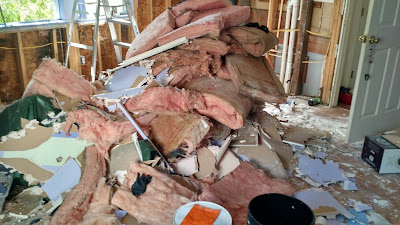 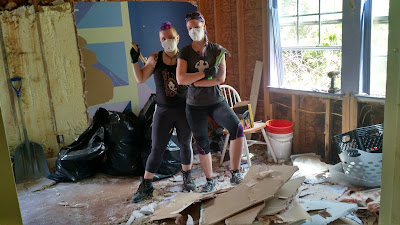 Not only is this cheaper than therapy, I get paid to do it!


Everyone in the neighborhood was doing the same. Over the course of the week, the stacks of contractor bags and drywall and ruined boards piled higher along the sidewalks until most of Houston looked like a construction zone. Trash pickup couldn't deal with all the debris, making only their regular rounds to pick up a single can of garbage a week, which was laughable next to the stack of forty or so brimming bags of junk at the edge of our driveway.


Somehow we stuffed ourselves into the schedules of multiple contractors, and the professionals took over the upstairs room, installing a new roof, spray-in insulation, and new drywall. The contractor dealing with the main floor was a different story.

The landlord was paying us hourly to work on the house, but none of us have professional training in construction, so we had planned to limit our participation to removal of drywall and eventual repainting. But one day the contractor disappeared, and it was eventually discovered that he'd had trouble with his driver's license and been arrested as a result. His truck was impounded and his dog taken to the pound. As a personal favor, Scott picked up the pup from the pound and brought him home to us. And then we had an 8-week-old deaf pit bull to add to our list of difficulties.


Shithead, as his owner named him, was adorable, and well-behaved for a puppy of that age. I learned something about bathing a puppy, namely that I get at least as wet and soapy as the dog does. We weren't prepared to have a house puppy, though, so after a little over a week, Andrew drove out and delivered him back to his owner, who was out of jail but had no transportation.

But there was still the wall situation to deal with. I have some experience with mudding and taping from other peoples' DIY projects, so with no contractor in sight and money on the table, I dove in and did my best, teaching Rogue what little I knew along the way. One of the contractors from upstairs took time to hang the boards for us but didn't use shims, and the cement board was 1/8" thinner than the existing drywall, so we had the added problem of trying to make them match.

As of this writing, it's been five weeks since Harvey left. The fridges are both running. The oven still doesn't work but the stove does. We're on the last round of mudding, except for the front door and coat closet areas, which need structural work that we can't do. The damaged bedroom is fixed although not painted, and another bedroom is in the process of having its floor replaced, since the contractors discovered that it was at risk of collapsing into the driveway below.

The stress of living in renovation is getting to all of us, but I have to give my housemates credit for being amazingly tolerant of the whole situation even though it's obviously a major upheaval. I'm glad to be going through this knowing that all these awesome people have my back. To wax sappy for a second, in a way I'm grateful to Harvey, as it's brought us closer together and forced us to prove that as a team, we accomplish amazing things. Much love to Rogue, Scott, Danny, Mike, Andrew, Teresa, Ash, Joseph, and Austin for making the absolute best of a bad situation. I could have washed up from the road in any of a million places, and I'm really happy I landed here.
Posted by Skipper at 18:39 No comments:

I'd been home for about a month, sweating in the seemingly endless Houston summer, when we started hearing predictions for a big hurricane coming up from the Gulf. We stocked up on water, canned soup, and whiskey, just like blizzard preparation in New England. The predictions for Houston wavered with the track of the storm but got steadily worse as Harvey approached. The day before it was supposed to hit, we brought what we could of our furniture to the second floor, propped the rest up on bricks, and unplugged our appliances. 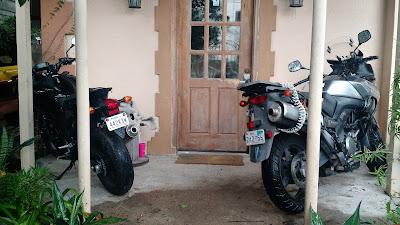 Those who had cars brought them to various garages around town. Rogue and I put our bikes on the porch, flanking the front door like gargoyles showing off their asses. We secured a tarp over the section of balcony on the third floor that was known to leak in heavy rain. Then we held our collective breath.


Friday afternoon was so quiet we wondered if it was all a joke. In the wee hours of Saturday morning I woke to howling wind and driving rain, pounding my window and flooding off the balcony. I went back to sleep, knowing we had made all the defensive maneuvers that we could and the only thing left to do was wait.

By the time dawn arrived, the air was still and dry. Saturday was as quiet as Friday and I started to think the whole thing had been a bit overblown. But the predictions for flooding were still coming, so we behaved ourselves and stayed home.

Saturday night we were into a game of Munchkin when the rain came in again, accompanied this time by constant lightning and deafening thunder. Several of us went out onto the front porch to watch the show. The water was over 18" high in the street, and Andrew playfully tried to shove me into it. I grabbed him and dragged him with me, and we went running down the road, kicking water at each other and howling. I'd never experienced such drenching rain before - it sheeted down like a bucket had been upturned over Houston. There weren't individual drops, but instead a wall of water cascading westward so hard that if I faced east I couldn't even breathe. 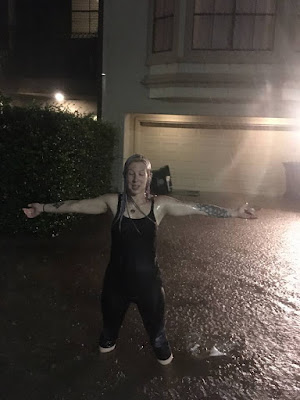 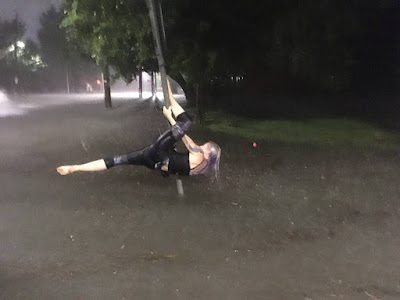 Ash and I went on a walk around the neighborhood, helping people who were stuck in their cars. Just around the corner from the house, we found a police cruiser drowning on the sidewalk. The officers who had been in it were standing in the open garage door of the house behind, watching it helplessly. 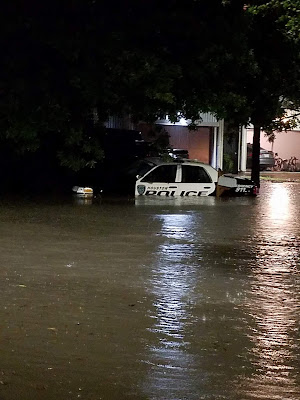 When we eventually returned to the house, we found water seeping in under the walls and doors. We picked up the few things that were left on the floor, and then I showered off the muck and invited everyone up to my room on the third floor. I own very little furniture, so there was room for everyone, even the dogs. Ash and Mike took the kayaks out into town, and when they returned, we were all well into the wine and the whiskey. We whiled away the rest of the night with card games, occasionally creeping down the stairs to admire the several inches of water sloshing around the first floor. 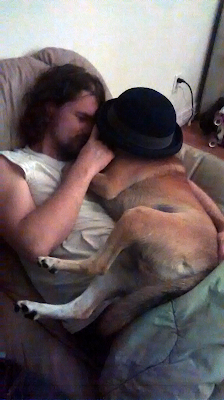 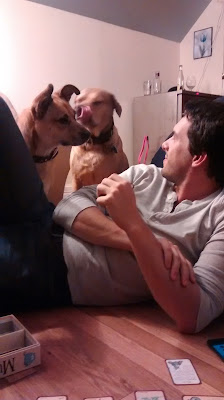 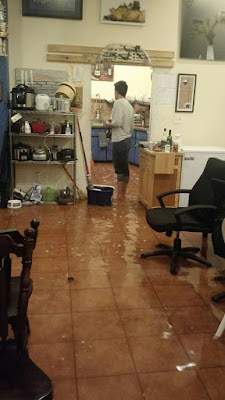 Sunday was a repeat of Saturday - deceptively quiet and dry during the day, with floods pouring in as soon as the sun went down. The water got up to about 8" in the living room this time. On Monday we took a walk to route 59, which was under more than twelve feet of water and smelled like gasoline.


By the middle of the week, things were back to remarkably normal in Midtown and Downtown. Most of the businesses were open, the cars had been towed from the street (and from our neighbors' garages, which are below street level), and the sun was shining. The only clue that anything had happened was the layers of silt and grime on the sidewalks and the water stains on the walls.
Posted by Skipper at 17:18 No comments: