Still at home. We had to clean the carbs twice, once yesterday (after which she flooded repeatedly, shut down, and puked gas all over the garage), and again today. After lapping the needle valves with a homemade gadget and some toothpaste, checking the floatiness of the floats, and recleaning a sticky slide, we reassembled her. Again. 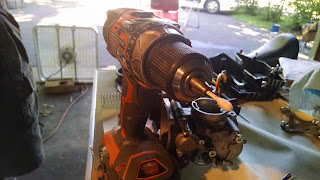 She ran this time, long enough to balance the carbs with another new, slightly more professional-looking gadget. (All those lines belong at the same height. I think I see a problem...) 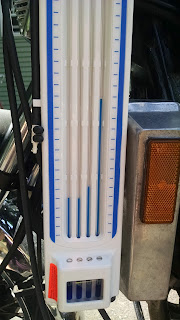 Then I went for a ride, with Abel in a chase car just in case. I pulled up to a gas pump and was about to do the thing one generally does in that location when Abel hopped out of the car and said, "Whoa, you're pissing gas everywhere." I looked down and started. This was not a small trickle. We had a gusher. I flipped off the fuel and stepped off the bike.

After removing seat and covers, we determined that the fuel hose, which I have no reason not to believe is from 1985, had just straight-up busted a hole in itself. Abel went home for the spare (I can only carry so many spare parts, but apparently hose is now going to be one of them) and then home for real after a replacement.

I made it... I'm not sure. Not very far from the station before she died again. I realized I'd left the fuel supply off, but even with it on, there was no gas showing in the fuel filter, and she wouldn't restart. I pushed her home, accepting help from a Harley rider who happened to be out on a walk as I was huffing my way slowly up a small hill.

After fixing some hose-location issues, she idled happily in the driveway for ten minutes before the heat gauge hit the red zone and I shut her off. A test ride will follow in a little while.
Posted by Skipper at 16:46