Stepping outside this morning, I was struck by the lovely weather. Breezy, sunny, pleasantly warm...a perfect day for a ride.

Shortly after that, I was a tad too warm, and it only got worse. Riding into Massacre Canyon felt like riding into a furnace. I never thought that a 90mph wind could be hot, but it was. I flew through Sand Canyon and Hay Canyon on route 34, and got hotter and more disturbed by the land as I went.

The town of Bartley was closed up, but had one building worth photographing. 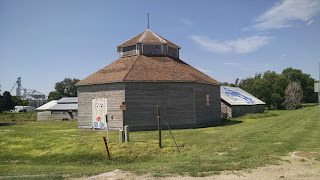 The desolation spread around me, as apparently endless as the sky, and the heat rolled off the asphalt and consumed me. Pinching my drinking straw to pour water on my shirt and jeans helped, but it dried in moments, and I didn't want to waste all my drinking water. If something went wrong, if Hades broke down, I'd be walking a long damn way.

Eventually I needed a break, and I stopped for lunch at the Skyline Bar and Grill in Benkelman, Nebraska. Over a ham and dill sandwich, I had a long conversation with a guy from Colorado Springs, who was in the area doing flood recovery work for FEMA. He gave me his number and said to call if I made it to the Springs, and he'd show me some good riding roads.

Back out on 34, the giant oven continued to cook me in my leather wrapper. I stopped for gas in a tiny, sandy, deserted town that convinced me I had reached the end of the world. 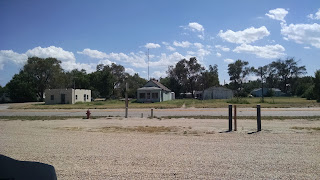 Finally, I decided road rash was the better part of heat stroke, and stowed my jacket in my luggage. I swore I'd never do that - but I'd never experienced heat like this before.
Suddenly, I saw the sign I'd been waiting for... 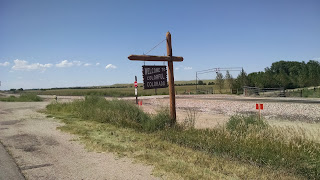 I rode on, smiling, suddenly feeling brighter. I had done it. I'd ridden a motorcycle to Colorado. With many adventures still to go, the first big mission was accomplished.

I stopped in Yuma, bought a bottle of water, drank half, and poured the other half down my shirt and over my pants. That was refreshing, for about three minutes.

Colorado seems not to believe in effective road signage, and I got turned around on a dirt county road south of the town of Brush. Eventually I found route 52 west, and from there, got my first glimpse of the Rockies, involved in a spectacular rain storm. (They're in this photo, I promise. Look hard.) 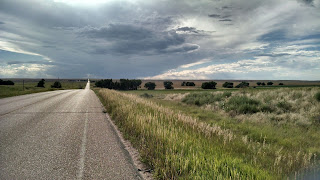 For a while, it seemed that no matter how far I rode, they never got any closer. The air started to undergo sudden and startling temperature shifts, like someone was flicking a switch - now it's cold, now it's hot, now it's cold again.

I chased the rain storm down I76, then I70, then the 470 ring road. It got cold enough that I put my rain jacket on just for warmth, but I never got wet. My GPS silently gave up on me, but I prompted it back into action when I stopped for jacketing. Around 7:30, I arrived at uncle Steve and aunt Ann's in Littleton.

We spent tonight catching up, as it's been many years since we've seen each other. The last time I was at their house, I was too young to remember, so this is basically my first visit.

Next up: exploring Colorado!