This morning began with coffee on the porch with Steve, while chatting about maps and
Colorado and family and other things. I wish I had a view like this to accompany breakfast all the time... 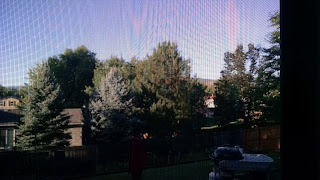 After we finagled Hades out of her hiding place under the back porch, I took off for Boulder. First on my list of things to see was the Redstone Meadery, and my GPS only took me in one unnecessary circle getting there. I did a tasting, went on the tour, chatted with the barkeep/tour guide, read some history, and bought a bottle of Juniper Berry. 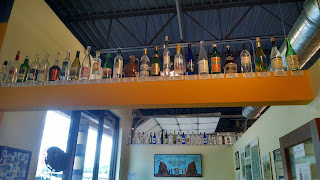 If you're familiar with fermlocks, this may be the biggest one you've ever seen. If you're not, this probably looks like a bucket of creepy witch potion. 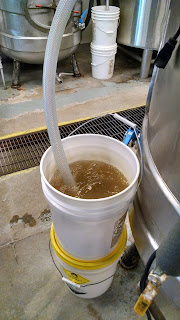 I rode aimlessly around Boulder for a little while after that, realized I had no idea what else to do, and decided it must be time to see the mountains. I took 119 west and headed up Boulder Canyon. 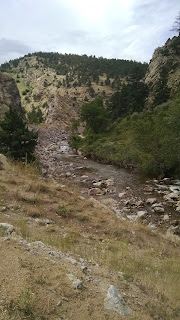 Near the entrance to the mountain road, there was a pulloff, and I stopped and took some photos because I didn't realize just how many pulloffs there were. Satisfied that I had something to blog, I took off again and enjoyed the twisties and the scenery. Trees, cliffs, mountain streams, tight turns... It was all beautiful.

Not far up, I noticed my head felt a little funny, and I started regulating my breathing to deal with the altitude. I rode with a little extra caution, as Hades and I were both breathing funny. She had developed a deep rumble, and some lag cropped up as the horses started to drop off to sleep.

Some sixteen miles or so towards Nederlands, I pulled off again when I saw water. It was a water supply, the Barker Meadow Reservoir. I took some photos, drank some water, chatted with a local who was out fishing, and went on my way. 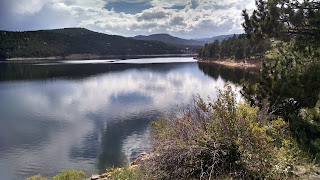 The road in had been sandy but relatively smooth. The road out was also sandy, and I didn't see the first of the giant holes until I was nearly in it. I hit the brakes and instantly knew I'd chosen wrong. The front wheel locked, the bike skidded, and I dumped it in the hole.

I shook my head, pulled off the tank bag before it got soaked with gas, and tried to upright the bike myself. Maybe on pavement I could've done it, but between the sand and the pothole, it was instantly apparent that there wasn't enough of me for this task. I ran back to the reservoir, where four tourist boys had pulled in as I was leaving, and asked for help.

We uprighted Hades without too much trouble. I thanked the boys, threw the pieces of
my smashed turn signal in the tank bag, and did a quick inspection. She started without much complaint, and I turned back towards Boulder. I didn't know how much gas I had lost, and I needed a turn signal.

Some googling got me to the local Suzuki dealer, and I got in line at the parts desk in the back. While I was waiting, a small woman with a mischievous smile came walking in my direction, wearing riding pants and motocross boots. We sized each other up and pretty immediately decided we were going to be friends.

"What are you riding?" she asked me.

"Suzuki Madura." She nodded, and nodded again to, "Wow, you know the Madura?" I asked what she was riding. 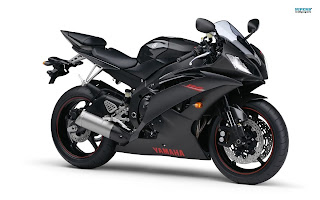 I let the next guy in line go ahead of me, because I was too busy listening to Isabella tell me about the time she was camping near some drunk yahoos who fell in a lake, then fell in a campfire, and when she tried to help, she fell in the fire too and burned up her headlamp. We exchanged phone numbers with the intent to do some riding together before I leave town.

Parts was busy and took a while to tell me that a new turn signal would have to be ordered from Suzuki, who only possessed three, and would cost $90. I said no thanks, and did they have anything else that might work? One of the techs came outside, and long story short, grabbed some packing tape and cobbed the lens back together. Isabella told me I had a beautiful bike.

"Woah!" I heard suddenly, and turned to see another tech who had exited the shop, and was now staring in my direction and shielding his eyes. "That," he yelled across the parking lot, "Is a Suzuki fucking V4 Madura!"

He came over and said. "I was just talking about these things earlier. That's a downdraft..." He squatted down and peered at the carb. "Nooo, that's not a downdraft." He had surpassed my knowledge, so I reserved comment and made a mental note to Google 'downdraft carburetor.' (Apparently a carb is updraft or downdraft depending on its spatial relation to the intake manifold.)

Isabella and I hugged goodbye with promises to keep in touch. I pulled out and revved the engine in the direction of the excitable tech, who did an adorable it-gives-me-shivers dance in response. I rode back to Littleton with a smile, thinking how very fortunate it was that I had dropped my bike and damaged it.