After another crappy hotel breakfast, I packed up and headed out. Until Nashville, I'd been taking state and county roads, making an effort to slow down and see things. But after leaving my new favorite city, I was on a mission. I hit the interstate and put the hammer down, no longer caring what funny or historic roadside attractions I was going to miss. I discovered that putting my feet on the buddy pegs changed my body position and allowed me to ride faster, and I did most of the day that way.

There are no photos, but I did meet a cool biker at a gas station. He was alone, touring the country for the summer, living on the bike until he had to go back to his work as a teacher in New York in the fall. He was a very experienced motorcycle tourer, having done many loops of the US and at least one of Alaska. We spent half an hour talking about the wonders of bike travel and our mutually held disgust of people who "travel" by watching TV in their RVs at various campsites.

I asked for his number and he said he didn't have one, but told me I could contact his daughter in Nashville to get in touch with him.

I ate lunch in a Hardee's, and was disappointed to find that it was basically Burger King. All these famous fast food places that I've been visiting to get a better idea of what the rest of the country eats have been very disappointing overall. I can't wait to get back to real food.

At another gas station, a biker who was exiting as I was entering turned around and came back to talk to me.

"Yep. I'm thinking about buying it."

I arrived at Carl's in the late afternoon, and after some cheese and crackers, helped him with a set of shelves he was constructing in the basement. We had salmon burgers for dinner (real food at last!) and then visited his office to pick up more shelving.

The building he works in was constructed on an incline, with the idea that if Carnegie Mellon failed, it could become an automotive assembly line. But CMU obviously did not fail, so now they have a building with tilted halls and a funny story. 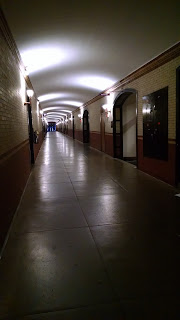