Upon another recommendation from the woman at Pammel, I found the Old Market when I got to Omaha. I secured the bike as best I could (mostly I just hope that people won't pick on a vehicle that clearly belongs to a lone, long-distance traveler, but I do lock up my helmet and carry my tank bag with me) and went for a wander. 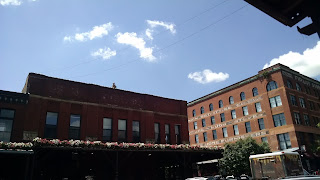 The streets and buildings are all brick, and flowers grow from the edges of the roofs. It reminded a little bit of the aesthetic of Italian cities. 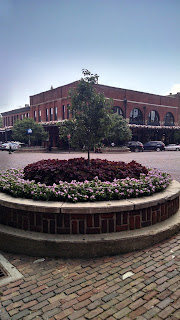 I asked at the record shops, but they only had patches for bands, not for the state of Nebraska. There's a passageway between two of the buildings where the outdoors apparently went indoors. 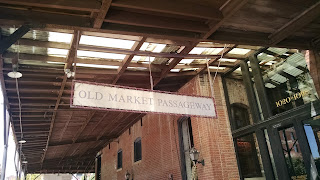 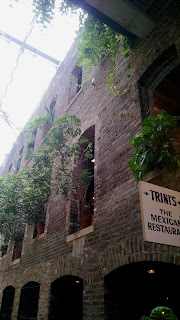 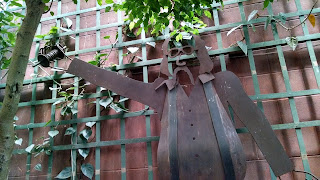 I poked my head into various restaurants and wandered up and down until I spotted Plank and went inside. The bartender and one of the cooks were very friendly, and the blackened fish tacos were wonderful. Oh, and if you're looking for something to do with whiskey, a combination of white whiskey, peach nectar, and lemonade is qvery tasty. 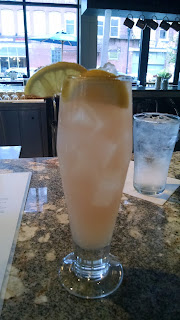 From Omaha I headed toward Lincoln to catch back up with route 6. Hitting stop light after stop light in hundred-degree heat, even my high temperature tolerance reached its limit, and I pulled off the jacket and secured it to a saddle bag. Eventually I reached the edge of the town and the road opened up again. Something about my shirt didn't feel right, and I glanced down to realize that this particular tank top was not built to withstand high wind, and had lowered itself to well below my cleavage. I stopped in a hurry and put the jacket back on, after making some trucker's day.

I'd been warned about construction on the west end of Hastings, but the workers had gone home for the day, so I flew on through. The new asphalt hadn't been sealed yet, though, and it flew up in clouds around the cars as they drove along. I snapped my collar closed and hunkered down, knowing what was going to happen when the tractor-trailers doing 70 in the other direction passed me. A sandblast and a shower of rocks felt about as good as I imagined, and it happened repeatedly for some miles. I got pretty lucky, though, and didn't catch any in the neck, where my only exposed skin was.

My sense of space has changed since I've been here. If that happened back at home and lasted more than 400 feet, I'd probably have gotten off the road. Here, I considered myself lucky that it was less than 10 miles.
Posted by Skipper at 11:05