Then a man walked up and told her to hurry up, clearly thinking he was funny. "And then I have to deal with THIS!" she said, waving an annoyed hand at him. He guffawed.

"Hit him with the cash register," I told her. "Solve two problems at once." She grinned and pointed at me like she wished she had thought of that. I don't usually wish violence upon complete strangers; Tony had made me grumpy.

But the road is a fickle mistress. One day she reminds you to keep your guard up and your wits in shape, but just when you find yourself newly reluctant to speak with strangers at rest stops because you don't want to deal with what might happen, she restores your faith in humanity... 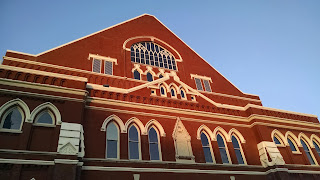 By the time the Trace was over, I was ready to be done with it. It's free from commercial crap and very easy riding, to the point where I was bored and actually leaning out of the curves to tip the bike over more and try to wear off the chicken strips. 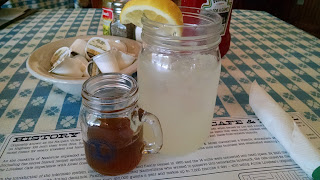 Newly arrived in Nashville, I started my next adventure with lunch at the Loveless Café. At long last, I got to try real grits, and they're wonderful. I want to make them at home. 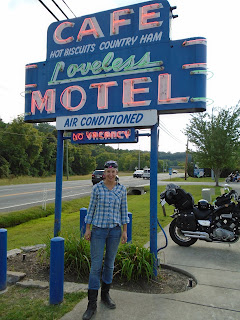 Stuffed full of barbeque pork, eggs, biscuits, and grits and wondering if it was nap time yet, I took 100 east into the city. Following directions toward the library brought me straight down Broadway, the heart of the live music scene. 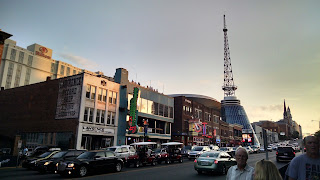 Grateful for the first time to be inching along in heavy traffic, I popped up my shield to get the bugs out of my view and just stared. All of the neon...all of the bars and the people...all of the music already being played, long before dark. From every corner and every window there was a beat or a melody. The store fronts were either bars or boot shops, all of them bustling. People wandered along the sidewalk, sat with drinks, or carried various musical instruments around. I had to remind myself I was still driving so I wouldn't just sit and ogle the sights indefinitely. 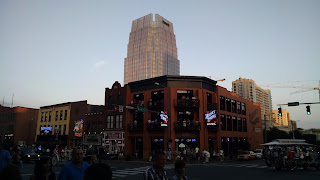 The library only allows 20 minutes of internet access, not enough to blog, so I used their WiFi to write a little bit from my phone, and then returned to my bike when they closed for the day. I changed into a fresher shirt and put up my hair in the parking garage, then set out on foot. 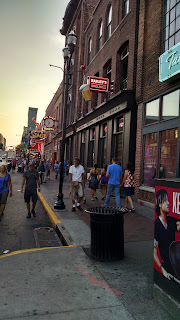 Unsure where to begin, I took a random street that went toward Broadway, then followed a group of tourists down an alley. It was labeled with a neon ALLEY sign, so I thought perhaps there was something interesting in it, but it was just a garbagey-smelling alley like any other. I hurried out the other end and down to Broadway.

I've been wanting a pair of Western boots for a while, so I stopped into Broadway Boots and had a look around. I knew I couldn't fit a pair in my luggage, but I was willing to bet they'd ship. I had decided that most of them were out of my price range and was about to leave when one of the guys working in the store said, "Hey, you can't leave now, I just put on KISS for you!" I paused and heard Beth and smiled. I stuck around.

He asked me for my favorite KISS song, and I said it would have to be Detroit Rock City. When Beth ended, Detroit came on. After he finished with his other customer, we started chatting, and I started trying on boots. It turned out he was also a long-distance rider, and he'd come to Nashville a few months before from Canada, on his bike. I asked where he would go with one night to spend in town, and he made a couple of suggestions and then said if I was interested, he could show me around after he left work. We traded phone numbers and I wandered away up Broadway.

I didn't wander very far. The Tequila Cowboy next door was rocking, so I ducked in and got some water and a "mixed anything." (I got that from a friend who died some years back, and still order it sometimes in his memory.) Jerry Don and the Last Chance Band were onstage taking requests, and I found myself a corner and enjoyed a good drink and great music. 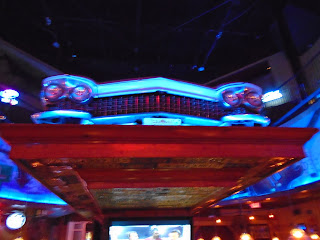 Eventually I moved to a seat at the bar, and after a few minutes a guy walked up and asked to buy me a drink. I accepted and joined him and his friends at a table. His friends were nice, but Daniel was unfortunately more interested in me than in the music, and he gave me so many pats on the back and arm squeezes and drink clinks that anyone would've thought he couldn't hold himself upright under his own power. I told him I was meeting up with someone shortly and he looked disappointed.

He introduced his friends as Josh and Blake, and I wished one of them had been the one to buy my drink, as they had the good sense to keep their hands to themselves.

"He doesn't seem like he's here to party," I said, nodding at Josh, who was spending most of his time on his phone.

"He's deploying next week," Daniel said. "We're showing him a good time before he leaves."

Josh was in the Army and on his way to Afghanistan. I asked if he was excited or nervous to be going, and he said, "Meh, it's paid vacation."

"Thank you for your service," I told him.

"What's your job in the Army?"

"They call me a baby killer." He said this with a laugh.

Daniel danced with me for a little while, and then his friends disappeared, and then I made myself disappear and moved on to the Honky Tonk up the street. The band onstage had a wonderful female fiddler that I enjoyed thoroughly, but I only caught the last two songs of their set. I went outside again, looking for some water, and as I was walking I suddenly felt a hand on my back. Daniel had somehow found me again.

"I had to get out of there," he said. "Your friends tried to start a fight!"

"Well someone. Some guys. They got all up in my face." I wondered what he had done to start this battle, since Nashville really isn't a bar-fight type of town.

"You mean your friends?" I asked.

"No no, not my buddies! Some guys. They were like, You gotta leave her alone." Suddenly I understood that I had been defended by some strangers, and I wished a high-five upon them. Daniel, however, did not understand. He grabbed a rose from his friend, who had two, and gave it to me. We all went back into the Honky Tonk, then up to the second floor.

I found a spot by the stage, two feet from the lead guitarist, and Daniel parked himself next to me with his hand glued to my back. Fed up, I turned to him and said, "You know we're not a thing, right?"

"Of course!" he said indignantly. "Why would we be a thing? We're not a thing. We're friends!"

"Do you touch all your friends like this?" I asked, imagining with some amusement the scene that would follow him applying himself to his buddy Josh in this manner.

"Of course I do," he said. When the song ended, he said he had to go, and I never saw him again. 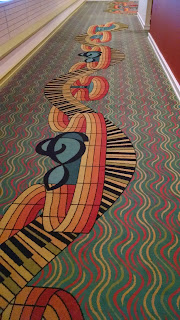