I pulled into Great Sand Dunes around 5pm. After a wander around the visitors' center and a walk around the Great Sand Sheet Loop Trail, I headed into the actual sand. I didn't bother going past the streams at the bottom, since I didn't want to get my boots and pants wet and it was going to be dark soon. 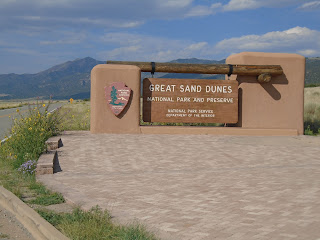 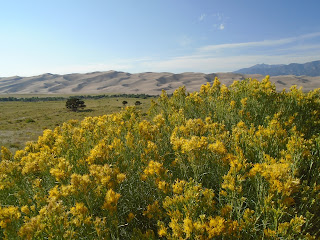 I tried to eat some prickly pear and mostly just ended up with spines in my fingers. 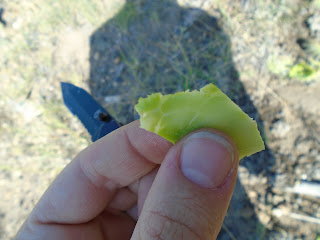 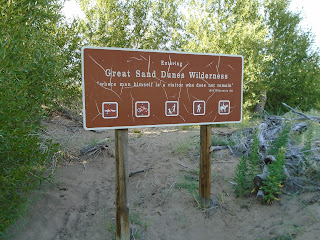 Playing in the water was strangely satisfying. It was cool without being freezing cold, and when I dug my fingers into the red sand, black sand came up from underneath and formed artsy patterns in the flowing water. 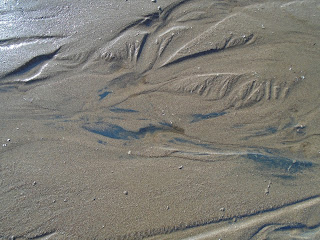 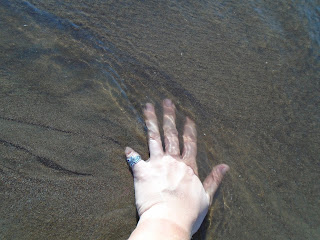 When I could tear myself away, I moved on to Alamosa, down 285 through La Jara, and west on 17 through Mogote until I found a campsite. It was an RV park, and the sign on the door of the closed office announced that sites were $35 and showers were $8. I made my camp as the sun went down and ate my soup with the company of a lovely crescent moon. (Actually about six of them...I think I need contact lenses.)

The wide-open land let the wind roam through the campsite, flapping the tarp on the bike and rustling around my tent like a small animal trying to burrow underneath. I didn't sleep well. When there was finally enough light to justify getting up, the sun was still below the horizon. I was cold until I got out of the tent - and then I was colder. I packed my things with clumsy, numb fingers, washed my mess kit in unheated water that was warmer than the air, put on all the layers I could find, encouraged Hades to start with some extra throttle, and snuck out before the office had opened again.

Antonito provided gas and truly awful coffee that I drank in desperation. Some thirty miles to the south, Las Piedras provided a much better scene at the Chile Line cafe, and the knowledge that the ambient temperature of the night before had been 34 degrees. The coffee was worth drinking, the locals were very friendly, and the green-chile breakfast enchilada was exactly what I wanted. A blonde woman in skin-tight lycra capris had grown up in New Hampshire, and when questioned about her reasons for coming here, told me, "For the skiing, and to save the Indians. But they've got all these casinos now. I'm just trying to save myself. Ha, like that's ever gonna happen!"

No landscape photos were taken this morning, as the cold demanded the large winter gloves, which make operating the camera harder than it's worth. With my fuzzy layer, protective layer, rain suit, and winter gear, I looked like I was off to find the Abominable Snowman. But I was remarkably comfortable, so I'm not complaining. 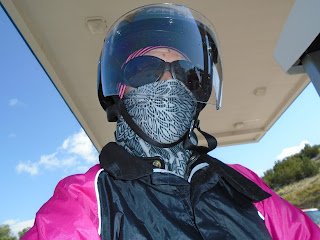