I seriously considered making a swing in the direction of New Orleans. Alex has recommended it, Sarah lives there now and invited me, and Gypsy also invited me; but it would've added a minimum of three days to my trip, and I need to get home someday. I think it will be its own trip in the future.

I returned to my neighbor's campsite in the morning to wash my dishes, and he offered me a cup of coffee. I accepted, and sat and enjoyed good, strong, non-instant coffee with him and his wife and their two Yorkshire Terriers. He told me a secret to camping in the west, which I wished I had known two weeks ago: Bureau of Land Management. Apparently their land is extensive, public, and free to camp on. If you go to a maintained campsite, it's not free but still cheap. He gave me an extra guide to Texas camping that he had lying around, and showed me his map of the western half of the States with all the BLM land marked. It was impressive, and I'm looking forward to planning a trip around it.

From Kisatchie, I continued east toward Natchez, Mississippi. I crossed the river a little after noon and wandered until I found a found a casino. I didn't want the contents of the casino, particularly, but it overlooked the water and I figured I could get lunch and a decent drink, to make up for the one I poured out the night before.

What kind of casino has cheap food and no cocktails? This one. I waited twenty minutes to sit on the porch for five, munching on fried catfish and watching the expanse of brown water go by. Distinctly underwhelmed, I returned to my bike and went to the Natchez Visitor Center. I found a map of the Trace, but it didn't tell me how to get there, so I got thoroughly lost and then Googled it. Finally I found it with the help of technology.

The Trace is gorgeous. There are no commercial enterprises allowed, either in the traffic or on the roadside. There is very little signage and very few exits available, the road is never more than two lanes, and the lack of distractions are perfect for enjoying the beautiful scenery. It pretty much all looks like this... 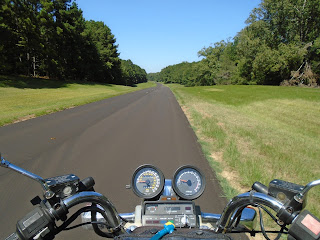 I stopped at Sunken Trace and found myself in spiderland. I stepped carefully, and managed to avoid getting tangled in any webs. 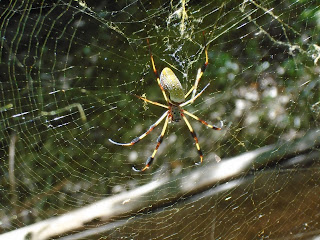 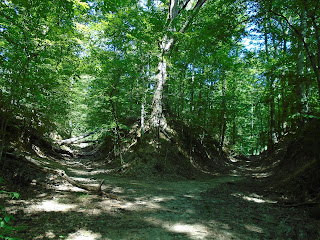