While planning this trip, I got a boatload of advice from Cider, who has a lot of experience with long-distance bike travel. He also put me in contact with a biker friend, Norm, in Nebraska, who invited me to stay.

Norm said he wanted to change my impression of the "nothing-ness" of Nebraska, and while I don't think anyone could convince me it's not flat here, he has more than proven that wonderful people live in Holdredge.

After a shower to untangle the nest that the wind rats make on my head every day, he gave me a tour of the house (beautiful!), and we rode in his Corvette (shiny!) to the country club (great food!). 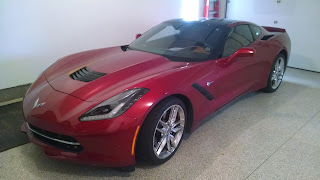 At the club, we were joined by Tyler, who sat down at our table and announced that he was buying us dinner. Norm protested and was informed that he was not fast enough.

Tyler asked about me, and Norm explained that I'm traveling across the country on a motorcycle.

"On a death machine?" Tyler demanded, and I sensed a challenge.

"Why?" he asked. "I don't get it. Why would you want to do that? I mean, I guess it's thrilling to still be alive at the end of every ride. That would make it exciting. You could arrive at, I don't know, a meadow. A random meadow. And go, 'I'M ALIVE! This is the best!'"

Over the course of dinner, Tyler challenged my transportation, my marital status, my education, my self-defense, and my religion. I don't run into too many people who issue such abrupt verbal gauntlet throws, and I had to dust off my dueling claws in a hurry. I must have managed, because at one point he turned to Norm and said, "She's witty. I like her." 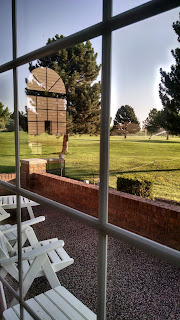 I awoke this morning to a gorgeous view of the golf course behind the house and more of Norm's wonderful hospitality. He made coffee and breakfast, and we conversed about this and that. A discussion of Rocky Mountain National Park and good riding roads in Colorado made him wish he were biking with me, and I told him if he's ever in New England that I expect to return the favor.

We hugged goodbye when it was time for him to go to work. Now it's off to Colorado. If things go well, I'll see Boulder today.
Posted by Skipper at 11:33