First order of business after checking out of the Inn was getting oil. I found an auto parts store and bought three quarts. She didn't take a whole one, so I had to find places in my luggage for three quart-size containers. As the miles went on, she still didn't want much more in the way of oil, and I wished I had bought less of it.

I stopped at a roadside stand for peaches, and upon telling the vendor about my trip and asking if I could buy just one peach instead of a whole basket, he gave me two peaches and a whole bag of pluots on the house. (That reminds me, I should remove those from my saddlebag before they become peach wine...)

Lubbock, TX appeared in the early afternoon, and I drove in several circles trying to find McKenzie Park and its Prairie Dog Town. It wasn't exactly impressive - the website does a good job of talking up a field with some signage. The animals were cute, at least. 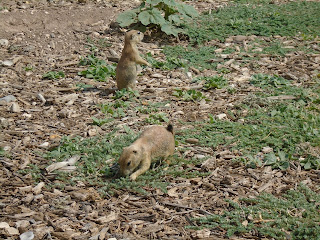 Lubbock promised nothing further for diversions, so with some hours of sunlight left, I passed up Buffalo Creek camping as too close to the city and headed south to find Lake Allen Henry.

In Justiceburg, a brown sign pointed down a side road to the lake. I followed it and found lots of RV parks and a closed gas station. Having gone farther than the sign advertised by several miles, and sensing that I was headed away from civilization (read: gas) instead of toward it, I turned around. I attempted camp at the RV park closest to route 84, but when I realized I could hear the traffic roaring by even with my earplugs in, I again decided to move on. I couldn't remember if there was a gas station in Justiceburg - a lot of towns out here are drive-through towns, with no services.

A road sign told me that the next city was 29 miles away, and I estimated that I had 30 miles left in the tank. I thought hard for a second and came to the conclusion that if I turned around and found no gas in Justiceburg, I'd be really screwed, having 28 miles or less to make a 29-mile journey. South I went.

I shifted into 6th gear, dropped my speed to 60, and leaned over my tank bag to minimize wind resistance. My shoulders were aching and I was pretty convinced I'd be walking the bike to the next gas pump, but we made it, rolling in with 106 miles in a 100-mile-capacity tank. The sun was on the horizon as I rechecked my map and confirmed that there was a campsite at Lake Colorado City to the south.

South of Colorado City, I had just given up on the finding the lake when suddenly a road sign appeared. I slammed on the brakes and just barely made the turn toward the state park. When I reached the entrance, however, it was closed and locked. So much for camping. I turned around again.

Sterling City was 45 miles in the future and the sun had gone down. After several miles in the dark, I turned down a county road, thinking I could just pitch my tent on the edge of some ranch land. But the road was rocky, with big drainage ditches to either side, and the mix of grass and cacti made me not want to try lying down anywhere. Having wasted another 15 minutes, I got back on 163.

When I saw a flashing yellow light ahead, I slowed down, assuming it was an intersection. Then it disappeared. I sped up. Over the next hill, it reappeared. Then disappeared again. I started to see bright white lights that I assumed were the city, and blinking red lights mounted on radio towers. The red lights were the strangest of all - hundreds of them, in three separate formations, all blinking in unison like the eyes of some giant alien beast. I wondered what the hell Sterling City even was.

The orange light appeared again about four miles later, and it was in the fact the crossing of routes 163 and 87. The white lights had turned out to be some kind of industrial complex several miles north of the city, and the city itself was a small-population truck-stop town. I was standing at the desk of the Sterling Motel, waiting to be checked in, when I felt something crawling up my chin. I flicked it off and realized with some horror that it was a giant wasp. Fortunately he seemed as stunned as I was, allowing me to pick him up by the wings for close inspection before getting rid of him.

My previous record, driving from the Catskills to Pittsburgh, had been 428 miles, and I kept saying I didn't want to do another day that long. So what did I do, from Las Vegas to Lubbock to Sterling City? Six hundred and twenty. I don't ever want to do that again.
Posted by Skipper at 11:59