A short search on eBay provided me with a good deal on a lightly used camping stove with an extra fuel bottle. I used this same type of stove last year, one that I borrowed from Sheila, so I'm already quite familiar with it; I just needed one of my own so I can stop borrowing things from people who might like to use their own gear for their own purposes. 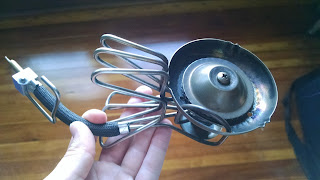 The MSR Whisperlite stove packs up in a charmingly small package; just give it a few minutes to cool first, or you may find a melted hole where you didn't desire one. The fuel bottle seems to be Armageddon-proof, although I have not actually tested that theory as stated. I used white gas (Coleman camp fuel) last year because I happened to have some, but they say you can also use kerosene or gasoline, at least one of which is easier to come by on the road. 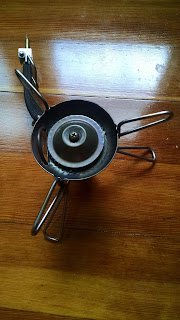 To use the stove, fold out the legs by twisting them in a circle until they snap into their individual niches. It stands steadily on a flat surface and provides a pretty large area to place your pot/pan/kettle/enemy's feet; it might be a bit small for a whole tray of cookies. Remove the cap to the fuel bottle, replace it with the pump device attached to the stove, and give it about 15 pumps to pressurize it properly. Open the valve until some fuel appears in the little dish on the bottom edge of the stove, light that with a lighter or match, and give it a minute to adjust. As it heats, the large and inconsistent flame on the bottom will become a smaller and more helpful flame on the type, in the style of the propane burner you may have in your home kitchen. 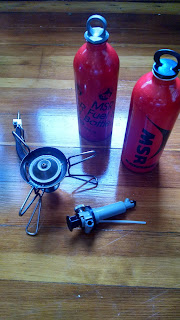 One thing to watch out for: when that ring in the bottom is filling, it may well be adding fuel to other locations as well, namely, whatever the stove is sitting on. Make damn sure that location is not flammable, or you'll have an exciting start to your meal, like the time I set a picnic table on fire in Ohio. Since that day I've been very careful to set the stove on asphalt, gravel, or a rock. No picnic tables, and definitely no forest floors.

Once it's lit, prop the foil windbreak around it to channel the heat upward. (You could add the windbreak first if you had to, but it's much easier to burn your hand using that order of operations.) The fuel bottle will lie on its side while the stove is running. I found propping it up a couple of inches to help with keeping the stove level, as the braided gas line is a bit particular about maintaining whatever shape it enjoyed during storage. 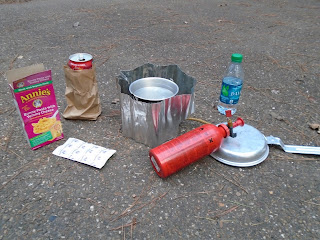 Update: the stove met a dramatic early end, documented in this post.

Upshot: the Whisperlite is clever; maybe a little too clever for me. The plethora of small, finicky parts that can break or get clogged seems impractical for a camping environment. The stove I borrowed from Sheila needed the bottle propped at the pictured angle, and the stove I purchased for myself needed it upright, which forced me to use a picnic table as a cooking surface and my gallon can of white gas as a support structure. It works, but it's awkward, and occasionally disastrous.
Posted by Skipper at 16:00 No comments:

I made the silly mistake on my trip to Nashville of failing to bring a sleeping pad. "Oh two or three nights with just the sleeping bag will be fine." No. Back problems and sleeping on the ground don't play nice together. So I have a new thing for my gear collection! 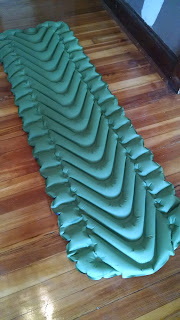 It's a Klymit Static V that I found factory-refurbished on eBay. It rolls up into a bag that fits nicely in my hand, and the patch kit is nestled inside a tiny pocket in the bag. In fact, when I received it I initially thought the patch kit was missing because it's so tiny. 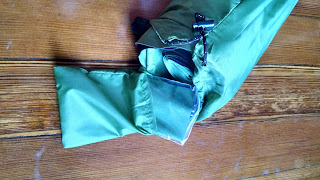 It took thirteen breaths to fully inflate, and seemed pretty comfortable when that was done. I haven't spent a night on it yet, but lying either on my back or my side, no part of me sagged enough to touch the ground. It's a tiny bit longer than I am (I'm 5'8"), which should be sufficient. 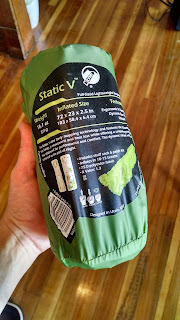 Update: I used this for two weeks of camping on the Team Nyan Cat trip, and I can't say enough good things about it. It keeps me warm and comfortable, and as long as it's sufficiently inflated, I have no problems with scraping hard parts on the ground. It rolls easily back to the same size it starts, with none of that "How did they ever get this in here?" nonsense. The only negative is that it's a little slidey, so if I move too much, my sleeping bag and I tend to inch off the side. The bright side of that is it doesn't pick up dirt and pine needles, so it stays very clean.

Upshot: I love the Static V and I never want to travel without it!
Posted by Skipper at 19:45 No comments: 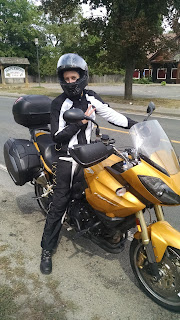 I didn't use my camera much on this trip, preferring the phone for its immediate ability to post to the blog without the intervention of a computer. There were a couple of shots on it, though, as well as a couple taken by the professional photographers at Killboy in the Dragon.

Bee and the V-Star spend some time chillin' together in Nashville. 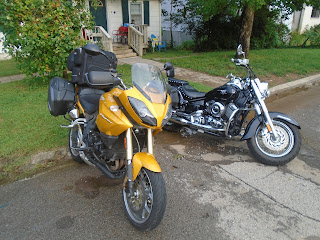 In the first rain-geared selfie I took, I looked so damn grumpy that even I had to laugh at myself. 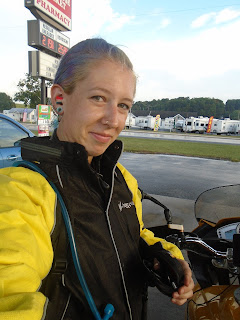 Hey lookit that, it's Bee's butt in the Dragon! 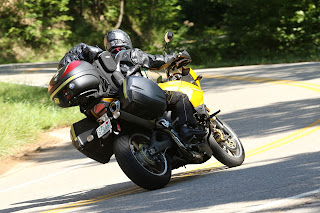 It arrived two days after I left, so now that I'm home, I have my new jacket. I'm super excited. It's a Scorpion Nip Tuck size small, and it fits perfectly (and matches my pants, which match my bike, because of course they do). 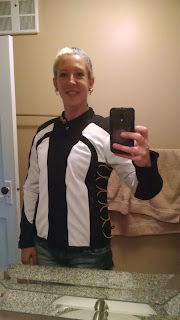 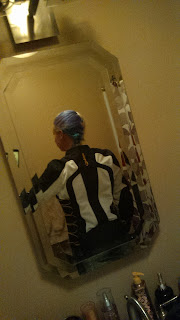 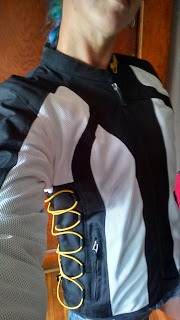 I've used up the Tennessee page in the atlas...good thing I memorized my route! 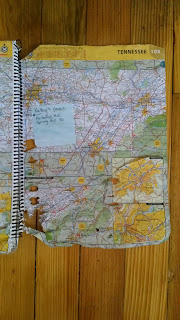 And that I have a backup. 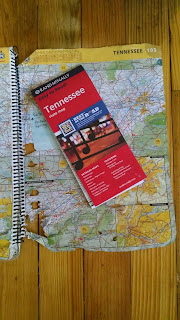