That night was a chilly one, and I had to steel myself to step out of the tent in the morning. I'd brought my sweater into the tent but not thought to insert it in my sleeping bag, so I was momentarily more cold after putting it on. Rogue rolled up the bedding while I set up the finicky stove. We'd forgotten to make another attempt at finding an O-ring, but it had worked once, so I saw no reason it wouldn't work again.

It did work. Much too enthusiastically. The second I had it lit, the flaming gas dropped from the stove to the surface of the picnic table, through the table to the ground, down the braided steel line to the pump mechanism, and all over the sides of the bottle.

"Put out the table," I ordered Rogue while I grabbed the stove and dropped it on the asphalt. The only thing I could find to smother the flames was a canvas bag, and I put it over the stove and held it down while flames shot out the sides.

I realized the gas was still on, but I couldn't turn it off, as the valve itself was on fire. After a few moments of struggling to grip it through the bag, I stopped the flood, but then the bag was on fire.

"Should we step on it?" Rogue asked.

We each stood on a side and glared at the fiasco on the ground, trying to suffocate the disaster with our thoughts. After some moments, I carefully peeled back the far edge of the bag, waiting for it to flare up again. The fire was out, so I pulled off the bag.

And the stove came with it. The pump mechanism had melted into a grotesquely twisted remnant of its former self and was fused to the scorched edges of the now-useless canvas bag. 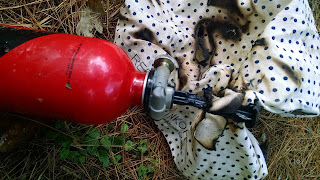 I picked up the whole mess and walked two campsites over.

"Good morning," I greeted the guys closest to me. "You want a laugh? Check out what I did."

"I thought I saw something on fire," one of them said, inspecting my prize. "You want to borrow my stove?"

We did that, and experienced the pure joy of effortless cooking, followed by hot coffee and perfectly boiled oats. Then we headed to Cabela's for a new stove.
Posted by Skipper at 07:41