The Joy of Nashville

As soon as I opened the door to my second home in Nashville, I heard Lorre's excited voice. We hugged and introductions were made, and within three minutes Rogue was whispering to me, "Oh my god she's so awesome!"

"Told you," I said, grinning as we unpacked the bikes. I had parked two inches too close to the V-Star and jammed my luggage shut against Frank's luggage, so I held Bee upright while Rogue extricated my bag of clothing.

We left our boots and bags in the basement, then returned to the living room and chattered with Lorre while she finished making dinner.

"I made meatloaf," she told us, "And I bought a whole chicken, so you'll have plenty to eat. How long are you staying?"

"Just tonight," I said, feeling bad about the obvious miscommunication.

"I wish," I said fervently. "I promise we'll stay longer next time." 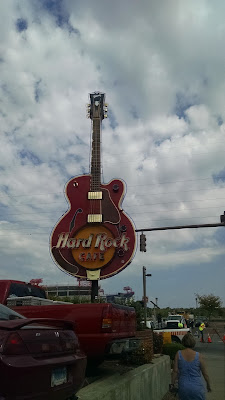 After dinner with Lorre and Ross we showered and then walked up the street to Jeni's Splendid Ice Creams. I visited in August and fell in love; I've never seen so many amazingly creative ice cream flavors. This time around I had Wildberry Lavender and Thai Pumpkin Curry, both of which were wonderful. I also sampled the Goat Cheese with Red Cherries, which was like cheesecake, only colder. As much as I wish we had a Jeni's equivalent in the northeast, it's probably a damn good thing for my wallet and my waistline that we don't.

From there we walked to the end of 12 South and admired all the pretty restaurants and behatted hipsters. Then we turned north and walked toward The Gulch and Broadway. We didn't make it all the way there - it's a pretty lengthy walk - but it was a warm and inviting night to just ramble.

Eventually the ice cream settled enough for us to go back to the house, write a few postcards, and then fall asleep on Frank's bed.

When he came home at 3am, I heard his boots on the floor over my head and poked Rogue awake. He walked quietly into the room without turning on the light.

I made introductions, and Frank flopped sideways across the end of the bed. Polite chatter quickly became silly jokes, and not long after that we were all in sober drunken hysterics. Eric calls this "phone book o'clock," when you're so high on exhaustion that you could read the phone book and find it hilarious. Then I wandered upstairs and returned with popcorn, which was put to use as both snacks and projectiles. For the record, Frank started the popcorn fight; Rogue and I both hasten to point out that we are not the kind of guests who start a food fight in someone else's bed.

At nearly 8:30am, we finally fell asleep. I was up again two hours later. I knew immediately upon seeing the time that we wouldn't be leaving town at noon as planned, but I didn't care. We only had 200 miles to do that day, and it was important to me that Rogue see some of Nashville. 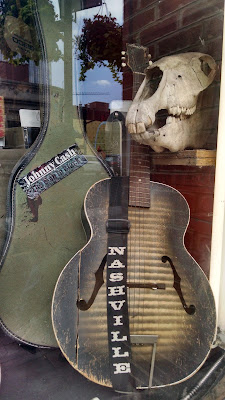 We began with breakfast at the Frothy Monkey. I already knew the food and the coffee were amazing, and it's about a three-minute walk from the house. I wish I knew how to make lavender lattes at home, because they're incredible.

Around noon we got back on the bikes, and I managed to navigate to downtown without using GPS or getting lost. We parked in a strangely awkward and narrow garage across from the library, then walked into the library garage and up the stairs with the idea of taking the Rennaissance Hotel's skywalk across the street. One flight up, there was a sudden shower of welding sparks from overhead, and we dove out of the way barely in time to avoid getting burned.

"Leave it to us to get set on fire trying to see a city," Rogue said. We raced back down the stairs and into the garage proper, then headed for a side door. Halfway there, I heard a man's voice behind us. 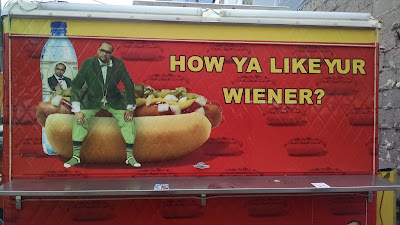 Unsure if the voice was addressing us, I turned around. A portly cop was walking toward us, gesturing. I stopped.

"Did you not see the sign?" he demanded. "The stairs are closed."

"English is still English," he drawled, glaring at me.

"When y'all come back, you go through the entrance at the other side." He pointed.

He seemed to be working up another sentence. I turned and walked away, Rogue following.

"Next time I keep walking," I said. 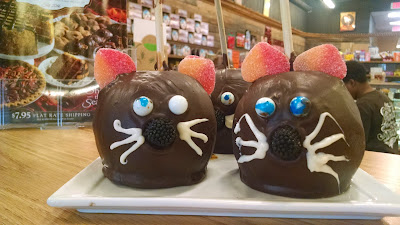 Down on Broadway, we took a wander through the candy shop, where a very enthusiastic candy maker gave us samples of praline. Then he pulled up his sleeve with a big smile and showed me his ICP tattoo. I grinned awkwardly and gave him a thumbs-up, uncertain why the juggalo colors were being flown in my direction.

We walked down to the river, which Frank fondly calls the Scumberland, and looked out over the swirling, muddy water. There was a single shoe lying on an inaccessible concrete platform, and I wondered if the owner was angry with the thrower, or if perhaps the wearer and the pitcher were one in the same. Maybe there had been a drunken overenthusiastic shoe-flinging striptease.

We stopped into Broadway Boots, where I'd met Frank, and then into the Tequila Cowboy. We stayed for a song and then I told Rogue she should really remove me or we'd be staying a hell of a lot longer.

"I get it," she said. "This town has a great vibe. I wish we could spend more time here."

There was no greater joy for me on our entire trip than that moment. 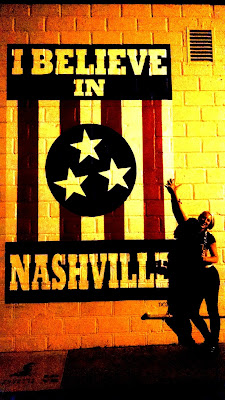