We stopped for gas in Linville Falls, North Carolina, and discussed our evening plans. There was camping in the immediate vicinity, and though it was earlier than we would usually stop, the atlas made the next campground appear quite far away.

"We can check out the town and actually do some sight-seeing," I suggested.

"We can make camp and then go sight-seeing," Rogue replied, and that sounded good to me. Our tent went up at Linville Falls Campground, an adorable place right off the parkway. A river ran behind it, and we jumped down the wooded bank to go admire the water. 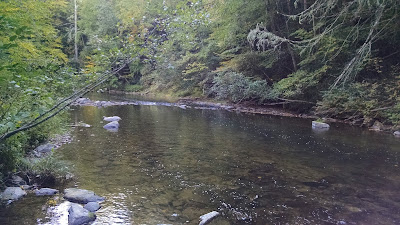 On our way back up, we heard a bike pull in. I nearly jumped up and down when I saw a lone rider park a red ST1000 and set up a tent. He gave us a nod and a wave and rode away again, leaving his tent near the river, and we went off to explore the town.

Our time at the Linville Falls Winery was limited to five minutes, as we showed up right before closing time. I sampled the blackberry and "cherry bounce" wines and wished I had room in the luggage to take some home.

The next stop was Linville Falls, which was actually on the same road as the campground. It required a little hiking, but the cool air invited a walk even in armored pants and leather boots. 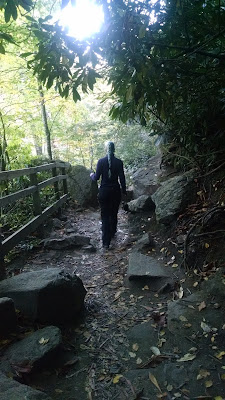 I was tired and not as up for adventure as usual. When we arrived, though, the falls were worth the effort. There were two viewing points, one at the top of the fall itself, and another several hundred feet above the first, with an aerial view of the entire fall from top to bottom. Another hiker was there with us, photographing the falls from a tripod. Rogue commented on how nice her camera was. 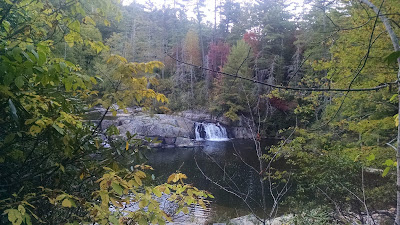 Dusk was descending as we returned to the parking lot. There were some traffic cones sprinkled seemingly at random on one side of the central median, and I treated them like an obstacle course, making zigs and zags and wiggling my way back and forth while I waited for Rogue to gear up. I exited my impromptu skills test in the direction I'd come and Rogue, not realizing I had just been goofing around, turned around awkwardly and followed me instead of proceeding straight to the exit. I laughed at us both as we rode away.

Downtown Linville Falls consisted of a couple of cute country-flavored motels, two pubs, a post office, and a general store. We wandered through the store, amused at the wide variety of things they carried. There were hunting knives and wall art, canned beans and wire owls, fresh pizza and vehicle fuses and coffee mugs. We were about to leave when the woman behind the counter offered us the last two slices of pizza.

It was warm, and we weren't about to turn down free food. She told us about the phenomenon of the Brown Mountain Lights, which shine in a nearby valley from no apparent source, and we put them on our list of things to come back for. Then we bought a bundle of firewood and headed back to camp.

The population of Linville Falls Campground was what I'd hoped to find in more places. We made friends with Josh, the biker, and Marlen, the photographer we'd seen at the falls, as well as a couple in a small camper. Rather than building our own fire, we brought our firewood to Josh's fire ring. Marlen brought s'mores, and we spent the evening telling travel stories. 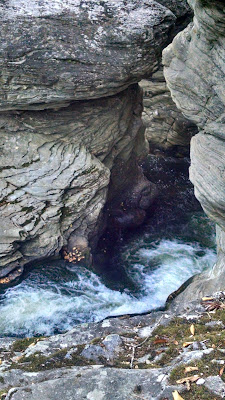 Marlen was a German girl from California, temporarily stationed in Asheville for work. She also had a motorcycle, but it was back home in Los Angeles. Josh was on vacation; he had ridden the Blue Ridge before but never camped on a motorcycle. The couple with the camper were from Florida, coincidentally escaping the hurricane that was tearing apart their home state while we sat around the fire eating marshmallows.

When the rain started, we called it a night and bundled ourselves into the tent. By morning we were still dry but the rest of the world was soaked, and the weather showed no sign of letting up. We'd been overtaken by the outer edge of Hurricane Matthew.
Posted by Skipper at 08:44