On Tuesday morning I set up the Whisperlite stove to make breakfast and quickly realized that it had a problem. One of the O-rings was either missing or damaged, so while gas got to the stove and produced flame as planned, it also poured rather copiously down the sides of the bottle, and I had to keep pumping it every couple of minutes to keep the pressure up. I set the windbreak up to act as a flame-break, and it was enough to keep the entire bottle from igniting. It required more prodding than I would've liked, but coffee and oatmeal were eventually made and consumed. Rogue, who had never had any kind of oatmeal before, decided that steel-cut oats were an acceptable food source. 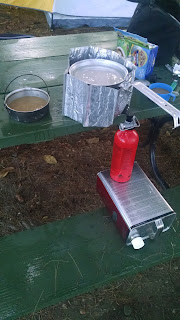 The rain was gone. We stopped at Target for a replacement gasket for the stove, but couldn't find one and moved on empty-handed.

Day 2 occurred entirely on Interstate 81, except when we were stopping for gas. I've ranted about I81 before and how much it sucks to ride, and Rogue spontaneously came up with the same complaints; it's only two lanes, and there are approximately 2,300 tractor-trailers per mile.

That night found us heading into Hungry Mother State Park to make camp. The route in was complicated, and I was glad to have GPS or I would never have found it. On the up-side, though, there was no highway noise, and the twisting back roads were beautiful. We made a loop around the Oak Creek side of the campground, chose a spot, and put our kickstands down. 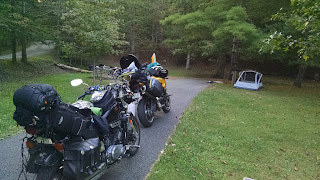 As soon as Bee tipped sideways, she started vomiting coolant steadily into the road. I wasn't concerned for her, as I knew I'd overfilled the tank the day before, but I didn't have anything to clean up the spill and felt bad leaving it there.

We bought a bundle of firewood, and then spent the next two hours trying and failing to have a campfire. The rain had clearly come through before we did, and everything was soaked, even the plastic-wrapped wood from the sheltered hut. Several applications of white gas and a lot of playing with leaves and tinder got us just enough flame to cook rice. 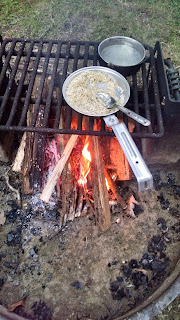 Rogue found a couple of toasting sticks and we got into a pack of hot dogs. The pathetically glowing bed of coals warmed them to a disturbing approximation of body temperature. I'd eaten half of mine, straight off the stick of course, when we heard the noise of several engines and a group of riders on cross-tour bikes came pouring into the campsite. They paused in the road while the leader of the party got the lay of the land, and I stood in the trees at the edge of our picnic table and stared.

I counted up seven of them as they buzzed into the campground and then all milled in different directions like confused ants. For several minutes they roared around aimlessly, and then one of them put down a kickstand two sites over from us, and the others followed suit.

"You gonna go say hi?" Rogue prompted me, laughing. "Or are you just gonna stand there with your weiner out?"

I'd forgotten the meaty blob on a stick in my hand. The sight of a bright orange KTM had erased all thoughts of dinner from my mind.

We waited for them to get their helmets off and then went over to make friends. They were mostly from Arkansas, and were excited about the many miles of gravel roads they had found that day. I drooled over the bikes for a few minutes, and then we wandered off to shower. 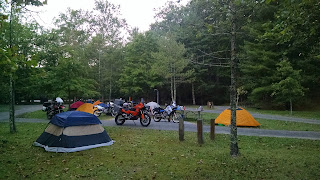 We spent the rest of the evening at their picnic table, swapping travel tips and road stories. A couple of them had clever stoves that screwed right onto the top of a small fuel bottle, and they used them to heat up cans of soup, no dishes required aside from a spoon. It was the most efficient camp dinner I'd ever witnessed.
Posted by Skipper at 07:41