Our new friends were headed for an open house at Cowboy Harley, but Rogue and I hadn't yet checked into the rally, so we headed for Crockett Street in downtown Beaumont. In the middle of a barren industrial district with no other people around, Robot Lady informed me that we had arrived.

Confused, I followed Crockett Street until it became Hollywood Ave., and still there were no other bikers in sight. We pulled a U-turn and tried the other direction, but Crockett appeared to end before we arrived anywhere interesting. Idling at a red light, I inspected the digital map closely and discovered that Crockett began again nearby and went off at a strange angle to the rest of the streets. I doodled around a few blocks and suddenly emerged in front of a long row of bikes parked at a curb. Finally.

I swung Bee into the street and backed up to the curb, settling her into place next to a shiny Harley. Rogue rolled Hades up in front of me, then started backing toward Bee. I waved her off and to the right, and she backed toward Bee again.

"More right," I called, hoping she could hear me through her helmet. She stared at me and shook her head as a car came down the street toward her. I walked into the lane.

"I can't do this," she said. We switched places and I rolled Hades in beside Bee.

"I'm sorry," Rogue apologized when I was off the bike. "I just couldn't figure out the angle." It was the first time in 1,700 miles that she'd panicked about anything, and she had fewer than a thousand lifetime miles under her belt before we left. I was impressed it hadn't happened sooner.

A motorcycle is a strange creature, either easier or much harder to operate than a car, depending on the circumstances of the moment. There are a million tiny errors to be made that have disproportionately large consequences, and mistakes are easiest to make at slow speeds. I've dropped almost every bike I've ever ridden, and it's always been the result of some minuscule incorrect steering choice at low or no speed. Kestrel, Hades, and the Hornet have all gone down doing parking lot maneuvers, and Bee got dropped while trying to put a passenger on the back. My feet were on the ground for that one, but she's so tall that the climbing force exerted by a passenger is a struggle for me to handle.

It turns out that Crockett Street is not only a road but also a location; too bad my GPS didn't know that. A fenced-off parking lot with brick sidewalks and cheesy old-fashioned storefronts was acting as home to Lace, Grace, and Gears. 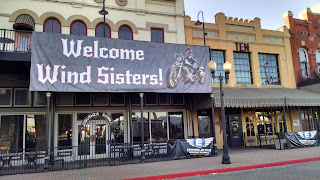 Searching for the registration table, we were greeted by a couple sitting under a shade tent and had our second round of a conversation that we would both repeat innumerable times over the next two days.

"Where are you from?"

"Did you drive here?"

"Wait, you rode your bikes? All the way from Massachusetts? How far is that?"

"Are you serious? How long did that take you?"

"You camped? All the way here? That's crazy."

When we told them that Rogue had just learned to ride in July, the woman waved her hands and said in her sweet British accent, "Oh my god, you're our newbie. You be here at 4 o'clock tomorrow. Right here, 4 o'clock. Got it?"

Her name was Layne and she was the organizer of the rally and admin of the Facebook group Sisterhood of the Asphalt Ribbon.We agreed to be present for whatever was happening at the assigned time and place, then wandered into the sea of vendor tents. 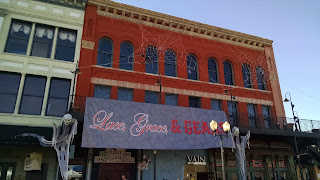