The afternoon wore on, hot and sunny, and eventually we found Louisiana and route 12. In Lacombe we made a gas stop, and Rogue decided we were definitely in the south when she found a new favorite fast-food source.

I got some garlicky local beef jerky a couple of doors down, and we snacked and then continued west. Somewhere on 12 a police bike caught up to us. The sheriff's officer on the seat looked us thoroughly up and down and then zoomed away, cut abruptly into a line of cars at an exit ramp, and was gone.

Rogue wanted to see the Mississippi river, so I did some Googling and found a campsite that appeared to be right on the water.

"How badly do you want to camp on the water?" I asked.

"Why are you asking that?"

"Across the street." I showed her the map, and she smiled.

We rolled into Baton Rouge with a couple of hours of sunlight remaining, and found ourselves a spot at Farr Park Equestrian Center and Campground. The office was closed, so we parked the bikes, grabbed cameras, and set off for the river. 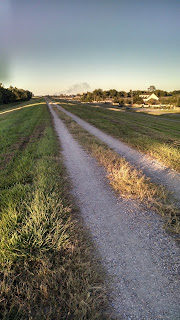 Across the street, the earth was hilled into a large dyke with a footpath running along the ridge. We scaled the near side excitedly, expecting a grand view of the river from the top, and were disappointed to be faced instead with trees and an ominously thick layer of underbrush. We paused for a moment.

"You don't have to come with me," Rogue said. "I will still respect you if you want to go back." 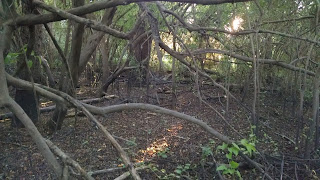 We headed down the far side and into the trees at the bottom. Some twenty feet into the forest, scraggly brush became a carpet of vines, waist high and menacing. Glad to still be wearing my boots and protective riding pants, I forged on through, trampling the carpet of giant plants and hoping there weren't any pit traps lying in wait. 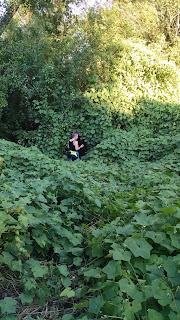 After several minutes of plowing through the wilderness, getting grabbed by vines and covered in burrs, we eventually found a spot from which we could see a glimmer of brown water. The plant matter became so thick it was no longer worth the effort to fight our way through, so we took a few pictures, had a laugh at ourselves, and turned back to make camp. 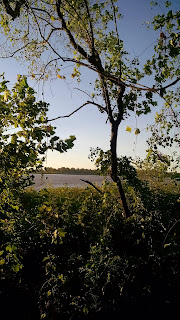