At our next supply run, I realized we must be entering the South when I found a new brand of beer... 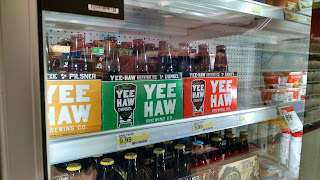 At least there was beer, because when we hit southern Tennessee, there was a certain lack of gas. I usually feed Bee premium, but when a pipeline breaks and people anticipate a shortage and thereby create one, sometimes that's not an option. 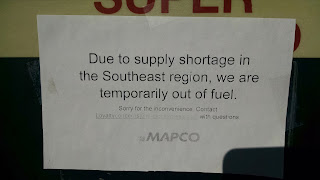 We found a map-dot tent east of Birmingham, Alabama and headed for it. Oak Mountain State Park proved to be quite large; from the check-in gate to our campsite was five miles. We parked the bikes in gravel and walked up a little woodsy hill to our site. The rest of the campground was a bit of an RV party, but the tenting section was both secluded and deserted.

I reported to Rogue that the shower house was quite nice, but upon her return she disagreed.

"That was a whole bunch of nope," she said with a shiver.

"Really?" I hadn't found them, or they hadn't found me. The only life I'd seen was a single cockroach in a trash can, which is to be expected in warm locales.

The weather was perfect. For the first time on the trip, we sat outside in t-shirts and were comfortably warm. When I finally went into the tent to read a book, I was asleep by paragraph three.

In the morning, my jaunt to the bathhouse got a little exciting. The toilet paper dispenser was mounted oddly high on the wall and also apparently broken. When I tried to get it to do its job, instead the front cover fell open onto my head, and I reacted without thinking and slammed it shut. Unfortunately my right thumb was in the way.

I wandered out of the bathhouse in a painful daze, bleeding copiously.

"Okay," she said, and continued cleaning up the tent. I didn't know where to look, so I stood and waited. After a minute I called again.

"Up here," she said. I climbed up to the campsite.

"Tried to cut the end of my thumb off," I answered.

"How?" She sounded incredulous. "Do we even have anything sharp enough for that? What were you doing?"

I was stuck between laughing and crying and couldn't answer.

I rinsed my thumb and Rogue bandaged and taped me up as best she could. I quickly learned to operate the stove, and then to pack my luggage, and then to put on gloves and drive with limited use of my right hand. 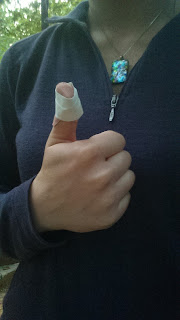