It took me a few minutes to realize that the restless swishing noise outside wasn't rain, but wind. I was okay with that; I'd rather have a windy ride than a wet one. I made our last road breakfast while Rogue packed up the tent for the last time. Then she helped me upright Bee, who was leaning so far over on the gravel slope that I was almost afraid to throw a leg over.

The drive out was more difficult than the drive in, as gravity was fighting me while I dealt with the washouts. Bee did her thing, though, and we reached the exit unscathed. I was concerned about Rogue and Hades, but they made it out too. 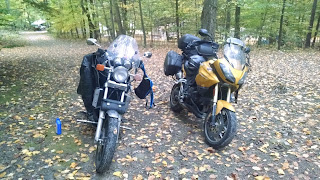 I headed for Clark's Summit so we could gas up. The extra miles driven while getting lost in Dalton had reached the bottom of Hades' tank. I told Rogue if she ran out we'd just use the white gas I'd been carrying since day 1, and I'd been glad to be rid of it.

"You won't be rid of it, though," she pointed out.

"What are you going to do with the container? Leave it on the side of the road?"

I made a face and told her to leave me to my happy fantasy.

In Clark's summit, I started to doubt my own ability to dowse for gas stations and stopped to ask the GPS. There was one located 1.2 miles away, and I pulled out of the parking lot where I'd turned around and rolled down the road to a stop light. By the time Rogue caught up, I'd been sitting at the light for a while. Lights with magnetic sensors often don't recognize the presence of motorcycles, so I took a careful look around for traffic and then ran it.

A quarter mile later, I noticed a cop car following Rogue. The road curved and I couldn't see her anymore. I slowed, then stopped on the shoulder to wait. When several moments passed and she still didn't appear, I realized she had either run out of gas or been pulled over. I turned around and went back.

Sure enough, she was sitting on the side of the road, the cruiser behind her with its lights flashing. I pulled Bee in ahead of her and dismounted.

The officer was very kind. I explained why I'd run the light, and he said he was a biker too and understood, and just wanted to make sure we were being safe. Then Rogue told me she had no brakes.

"Back brakes," she said. "I tried to wave at you at the light but you didn't see me."

It was true; I'd checked for her presence but not bothered to look for any hand signals. That much time spent looking backward raises my chances of running into something in the forward direction.

"Something cracked," she said. "I felt it go when I stepped on the pedal."

You don't need back brakes, I wanted to say, but Rogue looked shaken and the cop probably wouldn't agree with me. I took a look at the rear caliper and realized there was brake fluid everywhere. The officer asked what we were going to do, and I said we were going to ride to the nearest gas station and fix the problem.

"You have to understand," he said, "If something happens to you, if you go to the bottom of the hill and can't stop and get hit by an 18-wheeler, it'll be my fault for letting you go."

I promised him we'd be as safe as possible. Then we proceeded down the hill, Rogue inching at about 15 miles an hour and the cop inching behind her. At the first gas station, we parked and stripped the T-bag, the seats, and the saddlebags off Hades. 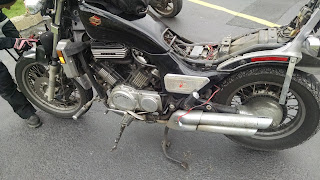 The wrenches in the toolkit bit into the castle nuts and chunked the aluminum when we tried to use them, so I rode up the street to the auto parts store and bought a socket set. I already owned one, but I hadn't brought it along. Now I own two. 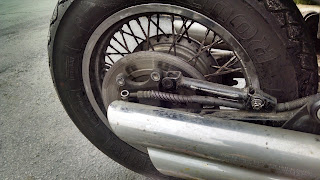 The caliper came off without a fight, and we were both shocked at what we saw. It had frozen shut and the rotor wore through not only the brake pad and the mounting clip but the entire head of the piston. One side, piston and brake pad, were fine; the other side was a hollow cylinder, edged in shredded metal and dripping fluid from its gaping wound.

"That's not getting fixed today," Rogue said, and I shook my head. 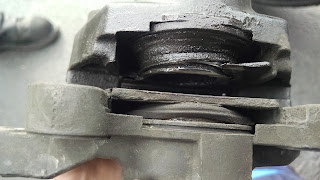 We went over our options: find a bike shop or drive home without rear brakes. It was Sunday, and the following day was Columbus Day; we couldn't stay in town long enough for the bike shop option to be viable.

"I'd rather you drive without rear brakes than front ones," I told Rogue. Oddly, she looked much more intimidated than she had the day before when the front brakes went out. "Remember, the front end is 70% of your braking power. And that bike won't pull a stoppie no matter what you do."

I wanted to offer to ride Hades for her, because I was confident in my ability to drive without the broken part, but she had never ridden Bee, and when the bike was loaded with luggage wasn't the time to learn. She'd be better off staying on old, familiar, slightly broken Hades.
Posted by Skipper at 00:17