When we went to sleep, the outdoors was dry. By dawn, the rain had caught us again. Since we were supposed to still be camping, I decided to make our usual camp breakfast on the front walk of the motel. I poured the last of the steel-cut oats into the pan with water, then caught the handle on my sleeve and poured it all on the ground. 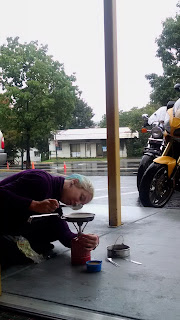 Fortunately I had backup in the form of instant apple-cinnamon oat packets. I messed with them too much and they came out slimy, but it was better than nothing, which in turn would have been better than wasting time and money going out to breakfast. At least the coffee came out fine and didn't get poured in the carpet. 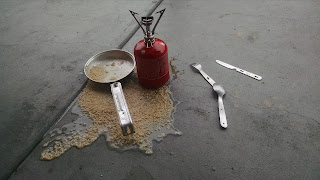 The doppler app Rogue had in her phone told us that the storm cells were headed west. It appeared that running east on 66 toward Washington and Baltimore would get us out of the nasty weather, and we set out with high hopes and a dry tent. It wasn't to be, though. Not only did the rain continue but the traffic was horrendous. I'd hoped that using the 495 and 695 ring roads around the large cities would keep us away from the worst of it. No dice.

I shrugged. We had agreed on the new plan and I considered us each to be 50% at fault for the poor decision-making. Stuck with the consequences of our brilliant idea, we re-entered the highway.

Just as it seemed things were moving again, someone five cars up in our lane slammed on the brakes. The next four stopped just as abruptly, I veered into the breakdown lane and stopped even with the bumper of the car ahead, and Rogue swerved around me and came to a stop another ten feet beyond me. There was nothing I could do about Hades' oily tire situation, so I took a moment to be grateful that she'd handled it well and kept pushing ahead.

At the next stop, we went indoors for coffee.

"Okay," Rogue answered. "I don't really have any front brakes, though."

"Can you be a little more specific about no front brakes?" I asked, alarmed. "As in, does the handle come all the way back to the grip?"

"Uh. Dude. That's important." I was shocked by the nonchalance with which she had stated the problem. No front brakes is an issue worthy of an immediate stop.

"It's gonna be a fun ride home," Rogue said with a grin.

"No," I said. "You're not riding home without front brakes." 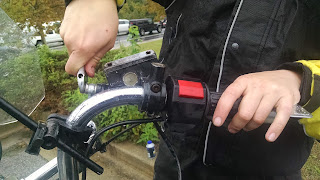 I bought a cup of donut holes for moral support and brought my snack out to the parking lot. Sure enough, the front brake lever was almost completely depressurized. I removed the luggage from Bee, pulled out the toolkit, and started removing parts from Hades.

Fortunately I'd noticed a small leak in the front master cylinder before I turned over Hades to Rogue the first time, and I'd asked Abel for the cylinder from the parts bike. We took it along with us just in case, and it was a good damn thing we did. 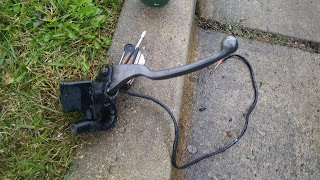 I removed the mirror, opened the headlight, detached the brake sensor wires, unscrewed the hydraulic line, and dismounted the cylinder and reservoir. The new-old set took its place without too much trouble. It was still raining, of course, so I draped a bandanna over the reservoir to try to keep the fluid dry while I peered under the lid and pumped the lever. It took a few minutes to bleed the air out, but eventually things were back to normal. Rogue took a test ride and reported all systems go.
Posted by Skipper at 13:11