I81 Is Even Better in the Rain

Rogue took a ride around the campground to test Hades' rear tire, and said she seemed okay. Once she was parked again, however, the root of the problem became clear as a slick of oil emerged from underneath the bike and decorated the pavement with rainbows.

"You're oiling your own tire," I said. "That explains a lot."

Rogue checked the drain plug and found it to be satisfactorily tight. The level of hazard the bike now presented was something we didn't want to play with on the twisty, hilly parkway. We decided to jump the mountains again, get back on I81, and run for it. 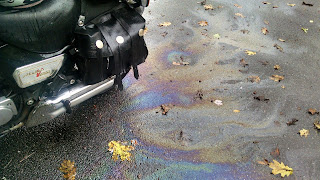 I backed Bee carefully around the puddles of engine barf, Rogue guiding me, and we took off. Routes 221 and 194 allowed us to admire some quaint mountain towns such as Minneapolis, and by the time 19E landed us back on 81, the air was dry again. I folded up my rain suit and we headed for a Bo Jangles.

I'm not usually a fan of fast food. The big M and other such places don't have anything I consider "food," although I've been known to wolf down an occasional carton of fries. Bo Jangles, however, won my tastebuds over with their crispy, juicy fried chicken. The closest Bo to home is nearly 450 miles, so I wanted a fix while it was practical.

By the time we were finished eating, the rain had found us again. Riding 81 north toward Strasburg, Virginia, we encountered a traffic jam and hopped in the breakdown lane. Eleven miles later it cleared up at the spot where a car carrier had gone off the road. Rain or no rain, I was glad to be on a bike; the cars parked on the highway would probably be there for hours yet.

At a small gas station I pulled out a package of crackers to snack on and promptly spilled them all over the ground. Hungry and unwilling to waste food, I picked them up off the pavement and stuffed them in my face.

"You must be cold," I said to Rogue, who wasn't wearing rain gear. I'd given her my old suit but it didn't fit her well, and she had opted to ride without it.

"A bit," she acknowledged.

"You sure you still want to camp tonight?" I asked.

"It's not cheating," I said, "It's smart. You weren't prepared for this weather and I don't want you to freeze." My own rain suit, purchased recently after the spectacular failure of my last one in Nebraska, was keeping me snug and cozy, but I was all too familiar with the bone-chilling cold that comes from a long ride in the rain. Had it been me without the suit, I would've said screw camping.

We rode well past dark and ended up at a Scottish Inns in Front Royal. Fifty dollars got us a hell of a lot more in Louisiana than it did in Virginia. Our door unlocked with a physical key, and it opened onto a poorly-lit room straight out of 1970. The walls had been patched with metal plating, where they had been patched at all, and the bathroom countertop listed to one side like a frat boy on Friday night.

There was no laundry, so we hung our clothes on the air conditioner, the TV, and the doorknob. Rogue unpacked the soaking-wet tent and hung it in the shower, where it dropped a forest's worth of leaves and dirt. 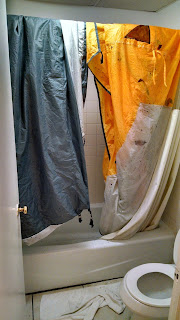 While she warmed up in bed, I walked across the street to Osteria 510, a beautifully appointed Italian restaurant and bar. I was the only customer, so I ordered a glass of wine and chatted with the owner while I waited for my takeout. Once upon a time he had owned a restaurant in Washington, but the late nights got to be too much, so he moved his business to Front Royal. He explained that most residents of Front Royal are Washington commuters, so they eat dinner early and then go home, allowing him to close at 10.


I'd told Rogue I was going to the gas station to find food, which was my plan until I saw the restaurant. When I returned to the room with a plastic bag smelling of fresh tomato sauce, she sat up straight.

"What'd you get?" she asked excitedly.

The butternut ravioli and tiramisu were a hit with both of us, the perfect finish to a nasty, wet day. I'd happily pause my next trip to go back to Osteria.
Posted by Skipper at 22:08