"You ever been to a Waffle House?" There was one across the street from the hotel, right beside a gas station.

"No, but I've always wanted to," Rogue answered. Before we even got our food, she was as disappointed with the place as I had been last year. "I was expecting IHOP for waffles," she said. She decided the hashbrowns were worth the trip, at least, even if the waffles were crappy. When we were done, I strapped the leftovers to the back of Bee, which for some reason amused Rogue greatly, and we headed for Texas.


After several days running between 340 and 530 miles, 128 felt like going next door. We made one stop, at an odd gas station scattered with knick knacks and trinkets that included a cross made of bullets. Rogue acquired a small plush alligator.

Somewhere in Virginia, it had occurred to me that we had no place to stay in Texas. I'm so accustomed to traveling by the seat of my pants and deciding on a campground two hours before I arrive in it that somehow I skipped the part where I should've reserved some lodging for our three nights in Beaumont. I had to assume that with thousands of bikers arriving from all over the country, all the campgrounds would be full, and we couldn't afford that many nights in a hotel even if there was space. I tried to call the campground listed on the rally's website but there was no answer, and a Google search turned up nothing, as though they didn't exist. Fortunately the address was posted.

"I'm hoping if we get there early enough, there might be a space left for us," I told Rogue. "And if it's full of bikers, we can just ask someone if they're willing to share their site with us." She agreed, and I set my GPS for Beaux Jangles campground.

Just before a stop light a mile off the highway, the device told me I had arrived. Confused, I pulled into the only parking lot in sight, which belonged to a bar. I backed into a space, helped Rogue back in next to me when Hades bogged down in the gravel, and took a look around. There were a couple of bikes in the lot and no campground visible, but the bar was called Beaux Jangles.

It was dark and cool inside, and the bartender greeted us with a smile. I told her I was looking for the campground, and she explained that the bar's owner was allowing his lawn to be used for camping in support of the rally. That explained a lot. 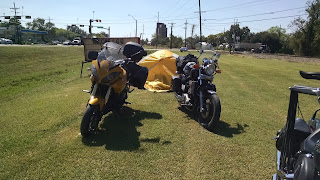 We had arrived plenty early; there was no one else on the lawn, which was long and wedge-shaped, bordered on one side by road and the other by train tracks. We threw the tent down in the middle to claim space, then went to lunch with a group of lady riders from the bar. They led us to Cheddar's, which was less than a mile away. The food was tasty and cheap, and the drink I ordered came in a glass that could've doubled as home for a goldfish.

Debbie, Kelly, and Melinda were all Harley riders, decked out in patched leather vests and pretty sparkly bandannas. Two of them were from Texas and the third had come from either Arkansas or Alabama. We chowed down on croissants, a Cheddar's specialty, and more food than any of us could finish, and talked about how and why we learned to ride. 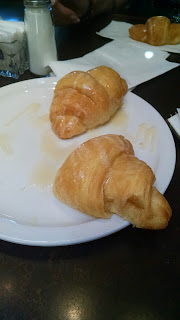