There was a bikini bike wash at the rally. Rogue brought Hades over, I popped her up on the center stand, and we took some soap and scrubbed out the sipes in the back tire with toothbrushes. Drewbag had advised me that the oil could be flinging out from the sipes and causing the poor handling on wet roads. There wasn't any way to test her out in the dry weather, so we did the job and hoped it would help.

When dark fell, the bikes with decorative lights on them were lined up in the parking lot to shine for passerby. Rogue and I chatted for a while with the owner of a red-lit, red-painted Harley. 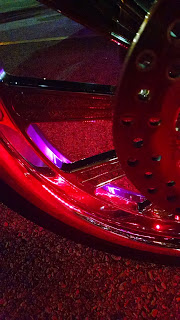 "You know, the woman who got the award for longest ride came like 1,700 miles!" he told us.

I laughed and pointed at Rogue. "You're talking to her." 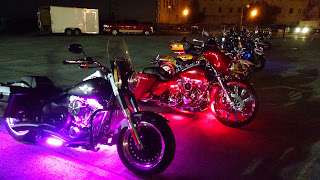 The two of us were sitting on the concrete bench between the vendor and the sound stage when a petite blonde woman in a blue-and-white plaid button-down sat next to me. I don't remember which of us said hello first, but within ten minutes she and her husband had adopted us as their new kids. The group of us talked about home, bikes, travel, family, attacks and self-defense, wine, cooking, and personal identities. She told us we had to come stay with her the next time we were in Texas and we swapped phone numbers. 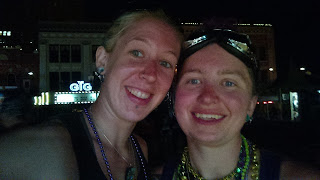 Neither Rogue nor I were really in party mode, so when the band shut down the stage and started packing up their instruments, we headed for our nylon home on the bar lawn. I was strolling toward bed after brushing my teeth when Melinda caught me. We hadn't seen our first group of Texas buddies since lunch at Cheddar's, and it was fitting to see them off on Saturday night. The rally was scheduled to run through Sunday, but we wanted to get to Austin to see a friend of Rogue's, and everyone we talked to predicted that Sunday would be boring anyway. 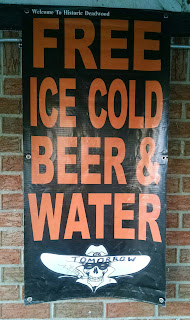 "I'm sticky," Rogue whined upon entering her sleeping bag. "I almost want to pay the $7 to shower at the truck stop."

"We can shower at Lauren's tomorrow," I reminded her.

I had to laugh. I didn't enjoy being sticky either, but I'd thrown it in the fuck-it bucket with all the other standard annoyances of road life - refitting my earplugs, bandanna, and helmet at every stop, unpacking and repacking everything I had with me every night, the inability to call someone without coming to a full stop and removing a lot of gear, the generous coating of dead bugs on everything. Being disgusting is an expected part of the package.
Posted by Skipper at 15:38