Some time early this summer, I learned about a rally called Lace, Grace, and Gears, which was to occur in Texas in September. I posted it to Facebook and asked who wanted to go with me, not actually expecting any companions to come out of the woodwork. But Rogue jumped on the thread and said she was in. Only one problem: she hadn't yet ridden a motorcycle at more than 15 miles an hour or outside of a parking lot.

Long story short, we fixed that. I lent her my Shadow 500 and we started riding around together, but Kestrel died after only a week. I'd known she had some engine issues, and they reared up and shut us down. Neither of us had time to tear apart an entire bike, so I lent her Hades.

I was a little concerned about putting her on a 1200 only two weeks into her riding career, but as Cider said, "A cruiser is a cruiser." Within a day Rogue was doubting her ability to ever ride a small bike again. She dropped Hades twice in parking lots but otherwise had no issues.

Fast-forward to Monday September 26th, the morning after the biggest game our team has ever played. Are we resting? Hell no. We're loading luggage on my bikes and setting my GPS for Texas. We're both exhausted and I've come down with a head cold, but we're pumped for a grand adventure. 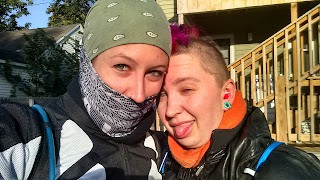