From a Cracker Barrel in York, Pennsylvania, I called our next campsite because the website said reservations were recommended. A man told me the office would be closed when we arrived, but if I called him at that number, he'd come check us in. I felt bad that we'd be disturbing his personal evening, so we rolled on it for the rest of the afternoon to get there as early as possible.

I was hoping for 7:30, and at 7:28 we rolled up a dark street in Dalton and stopped. The GPS said we had arrived, but we were in a thickly settled downtown area with no room for a campground. Confused, I parked at Newsies Pizza, the only place with any sign of a life. Inside, I asked after the Highland Campground.

"I dunno," said the guy making the pizza, "But everyone asks me that. Everyone's GPS leads them to the fire station. I think they're in Lake Winola."

I thought perhaps he should look up the location of the campground in the name of customer service if so many people really wanted to know, but I kept that to myself and went back outside. I telephoned the man at the campground and told him where we were, and he confirmed that the address I was using was correct and gave me no further help.

(Author's note: while Googling this problem from home, I discovered that the campground's actual address is 351 Old Mill Road in Dalton. The address on their website, 105 Whispering Winds Lane, leads to the fire station. If you look up the fire station, it resides at 109 South Turnpike Road. I can't fathom how this clusterfuck came to be, and I'm not impressed with the campground host for not knowing about it.)

A look at Highland's website showed directions from the highway, off an exit we had bypassed to the south. I spent a few minutes muttering the directions and tracing the map with my finger, estimating distances and trying to find unmarked roads.

"We need to find 11 south," I told Rogue. She pointed to a sign on the other side of the crossroads that said 11 South with a right-pointing arrow. I stared at it, then back at my map, then back at the sign, and shook my head.

"That can't be right," I said. "According to the map, if we're here, 11 south is that way." I pointed over my shoulder, opposite the sign. Rogue shrugged.

Official road signage generally knows what it's talking about, and I'd never been to Dalton before, so I decided to trust the words on the pole. We turned right.

A few miles later, the road narrowed and began to feel distinctly unlike a state route. I hadn't seen any more signs, and our surroundings in general did not feel promising. I brought up the map again, and sure enough, it showed us going north. We turned around.


Back through Dalton, past the fire station, we took the road I wanted to take ten minutes earlier and it was the right one. I managed to fumble my way through the memorized directions, down a long dirt road, and at last found the campground. I called the man again, and he came up to the check-in cabin.

"I forgot you guys were on motorcycles," he said. "I'm giving you the flattest spot we have, but you're the only ones tenting tonight, so if you see another spot you like better, take it." He pointed out the shower house, took our cash, and gave me a free tube of lip balm when I inquired about the price of the thing.

We bounced our way down a steep gravel road rutted by water, through a couple of tight corners, and up a hill. I knew we were in a circle of tent sites and had passed a line of them at the bottom, but for the life of me I could only see one in the dark. We parked at a precarious angle and started unpacking.

We'd found some dry-ish miles around Scranton, but close to Dalton the weather had worsened again. Gusts of rain swished through the trees, and we popped up the tent and threw on the fly as quickly as possible. Rogue was grumpy.

"I just wanted a few minutes," she said, "To set up and get in the damn tent without rain. That's all I wanted. But no. Is that really too much to ask for?"

I was warm and dry and chipper, but tried not to rub it in. Before we ever left, I'd known she was going to learn a hard lesson about rain gear somewhere along the way. An "I told you so" wouldn't help. 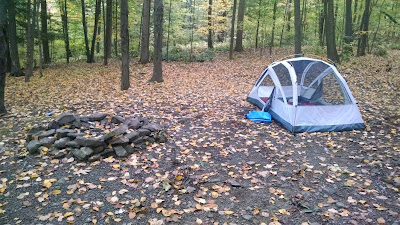 At the shower house, I was out of most of my layers and trying to convince myself that the shower wasn't creepy when I remembered that I was warm, dry, and not particularly dirty. I put my shirt back on and brushed my teeth while Rogue showered. Back at the tent, I explained that the shower house was in my "nope" category, and had I been really miserably cold it would've overbalanced that scale, but I didn't need the shower enough to tough it out.

From a logical perspective I'd give the campground a decent rating on their bathhouse. There were several toilets and several showers, and it was well-lit and pretty clean. The water was hot, the showers all had changing spaces, and the mirrors were clear. Four out of five shower curtains were actually hanging in a useful fashion, and four out of five toilets weren't full of shit.

But the shower was small and the floor was cracked, and the plumbing had seen better days a few hundred days earlier. I'm picky about showers, and the thought of stepping into one of those felt like making a bad life choice. There were also a whole lot of spiders, although they bother Rogue more than they bother me.

When we exited the shower house, I stopped. Rogue looked at me oddly, and I spread my hands to the sky.