The Mystery of Pigeon Forge

Frank had slept curled up like a cat at the food of his own bed, and when he got up, I realized he'd been nesting in a pile of popcorn.

"Hope that was comfy," I teased. Rogue and I were packed and ready to go, and Lorre had made us meatloaf sandwiches for the road. I stowed them carefully under the cargo net so they wouldn't become meatloaf pancakes, and we were off.

It was 3pm by the time we hit the road, but the lazy morning had done us good. The air was warm and the sun friendly as we headed east. I40 is really nice riding for a highway; it has gentle, pleasant curves and some very pretty and leafy scenery. Fifty or sixty miles along, I started to smell smoke. I didn't think much of it until the air got hazy and the rays of sun seemed to be making a great effort to reach us through the thick air. The haze and the campfire smell went on for nearly thirty miles. The flames never became visible, but there was clearly a sizable wildfire in progress.


We had planned to stay in Cherokee, North Carolina that night, but I didn't want our first mountain road experience to be in the dark, so we aimed for Pigeon Forge instead. I figured we could make the hop over the mountains to Cherokee in the morning.

Driving through Gatlinburg and Pigeon Forge in the dark was a strange experience. They're not towns so much as they're huge carnivals, particularly Pigeon. Everything was lit up in flashing neon; it felt like driving down a giant midway. I half expected a short man with a handlebar mustache to insist that I shoot the metal horses to win the stuffed animal.

I'd chosen Alpine Hideaway because they specifically allowed tent camping, while most of the many other campgrounds were unclear on the level of hospitality they'd show to someone without a wheeled camper. When we drove up, the registration cabin was closed. I parked at the gate to search for information, and as I removed my helmet, a woman came out of a camper on the other side of the gate. She didn't greet me, just stood on her steps and stared.

"Hello," I called. She continued to stare. "We're looking for a place to tent."

"A place to tent for tonight," I repeated.

"Do you know of another place we can go?"

She sighed. "Down the road. One of the other places."

A man came out behind her and walked up to the gate. I thought for a moment he might open it or at least ask me for more details, but he just stood and watched as I replaced my helmet and started my engine. I imagined she had told him, Make sure them hooligans leave.

Annoyed, I walked through a multi-point turn, waited for Rogue to do the same, and headed back down the hill toward the brightly-lit chaos. At Riveredge, I asked after campsites, and though the young man behind the counter was refreshingly friendly, he told us they only accepted RVs.

I thanked him and we moved on again. Riverslanding was easy to locate, but after driving through the camping loop three times, I couldn't find the office, only a general store that was closed. I exited over a curb and turned back the way we had come into town, headed for the option I'd been trying to avoid: the KOA.

People talk up KOA like they're the bee's knees, and while they've certainly got every amenity in the book and friendly staff to boot, you get what you pay for. I'd rather pay $7 for access to a water spigot and a bathroom than $40 for an in-ground heated pool. The other downside is that because they're so damn popular, you'd better hope to get good neighbors, because there will be a lot of them, and they'll be close.

The office was closed when we arrived, but while I was trying to figure out the oddly complicated after-hours check-in system, someone opened the door and invited us in. They asked whether we'd like a site with water and electricity, and since there was no price difference among any of the tent sites, we voted for utilities. The man behind the counter gave me a map and drew out the route for us to find our temporary home.

It wasn't hard to find, but when we got there, there was no place to park. The tent sites were located along the side of the river, on a steeply sloped grassy bank that did not invite motorcycles. I looped around again, hoping I'd missed a parking lot, and found nothing. Having passed the sites by, I looped a third time, then put my stand down in the middle of the road and walked back to Rogue.

"You think you can drive down that?" I asked. Bee could handle it if I was careful, although leaving in the morning might pose a bigger challenge.

I pulled out the map and was trying to figure out how to get to the non-utility sites when a man on a tiny golf cart drove up and asked if we needed help. When I explained our predicament, he said he would lead us to the other sites.

The road was made of enormous chunks of gravel, and I did my best to hang loose and just let Bee do what she wanted to do without interference. My front tire danced back and forth, but the biggest problem was the man in the golf cart, who was doing about 3 miles an hour. I stopped to let him get ahead, and he stopped too, perhaps afraid I wouldn't catch up again. I detoured onto the grass and rode along beside him instead. 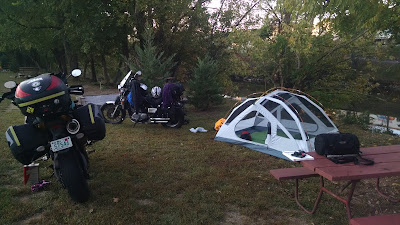 The primitive sites were much better set up for our purposes. The slope was gentle, and we were able to park both bikes without incident and still have a large flat spot left for the tent. In the center of the gravel loop road, there was a city of tents, at least twenty of them. A lone man wandered among them.

"This is exciting," I said as we made camp. "Tent friends!"

Rogue agreed. That one location doubled the number of tents we'd seen in ten days on the road, and it was a welcome sight. We showered and turned in for the night, thinking maybe the KOA wasn't so bad after all.

The morning was chilly, and I spent quite a few minutes whining and refusing to leave my sleeping bag while Rogue laughed at me. Just before sunrise we stepped outside, and as I stood up and looked over Bee, I was greeted with a strange sight: an empty field. The city of tents was gone without a trace. The look on Rogue's face told me she was as mystified as I was.
Posted by Skipper at 20:08