With my thumb still mostly intact, we moved on toward Mississippi. Interstate 59 took us into Meridian, which appeared from the highway to be rather dull and commercial. I opted to stop for gas when we were out of the busy district, and that proved to be a mistake.

The next exit after Meridian was for Savoy, and we followed the big green sign with the town name. When we reached route 11, however, the only gas station in sight was abandoned, falling apart and growing a field of weeds. There was one car, left for dead on the gas pad. No humans were in sight.

I weighed my options and decided to turn around. Back on the highway, the trip meter estimated 8 miles until Hades' tank was empty. Six miles south, the next exit looked similar to the last, only the sign said Enterprise rather than Savoy.

There was no way we'd make another exit, so off we went, hoping for the best. After a couple of miles we reached a stop sign, and I still didn't see any signs of life, so I prodded my GPS to find a gas station. There was one only a mile away, an apparently nameless relic of the '50s with ancient gas pumps and an even older group of men sitting at a table in the back. We got a few strange looks from passerby; our motorcycles and our brightly colored hair didn't really fit into the dusty town filled with pickup trucks.

Rogue said the town's cop was very nice, though, asking her questions about our trip and wishing us a safe ride. She was very excited to be in a place called Enterprise. 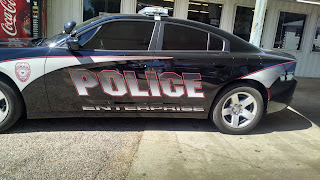 Route 59, while an improvement over 81, was still not that exciting. On the upside, though, we had found summer. The winter gloves, the scarves, and my rain suit were packed away, and we started to look for shade at gas stops.

Near Hattiesburg, I was hunting for coffee when I came across a can of something so ridiculous I stopped in my tracks.

"Uh oh," came Rogue's voice from the other side of a stack of chips. "What'd you find?" 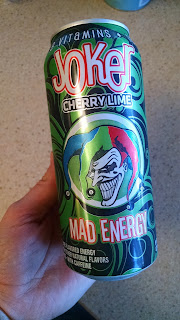 After the Red Bull hallucination fiasco in July, I was wary of energy drinks, but thought maybe if I left the Tylenol out of the mix I'd be okay. In fact, I was fine, but the drink was neither as tasty nor as effective as coffee, so I wouldn't do it again. That said, I regret nothing.
Posted by Skipper at 00:12