The "short hop" over the mountains on 441 was scenic but irritating, as we got stuck in a long line of slow drivers. I tried to enjoy the misty golden sunlight filtering through endless trees and hoped that when we hit the Blue Ridge Parkway itself the traffic would clear.

Unfortunately that was not the case. In fact, the cars got even slower, until I experienced the joy that Cider had found in riding Pike's Peak: cars moving so slowly that following them actually becomes a struggle, because a bike needs a certain amount of speed to lean over without falling down. Frustrated, I zigged back and forth, dragged my feet on the pavement, and generally made an ass of myself while we crawled along like heroin-addled snails.

If the entire Parkway is like this, I'm going to survive about 5 miles before I stab someone. 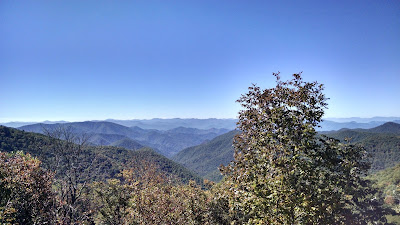 Fortunately the worst of the offenders in cages turned off at scenic stops and we were able to pick up the pace a bit. I skipped the first few turnoffs and eventually exited the parkway to get gas in Maggie Valley.

"You are such a tease!" Rogue complained. "Stopping at that pull-off and then leaving again."

"I was just waiting for you," I said. "So you could follow me to gas."

"The scenery!" she said. "The mountains, oh my god! I want to take pictures!" 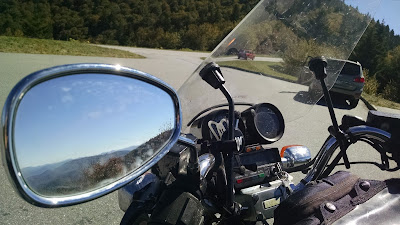 "That's nothing," I said, with a deliberately obnoxious been-there-done-that inflection. "You just wait. Don't waste your battery here; it gets better."

She stared at me doubtfully, but said she would trust my word.

Back on the parkway, I skipped a few more pull-outs and then stopped at one of the broadest views we'd seen yet. I enjoyed the scenery and cleaned my sunglasses while Rogue dug out her camera and did her photographer thing. 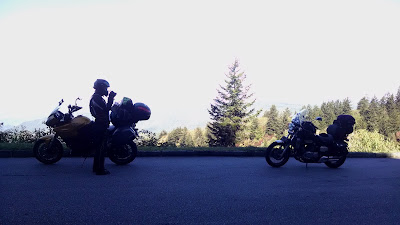 Among other reasons I was glad to have my derby wife along was her photography. A writer and a photographer are pretty perfect companions, and while I get some decent pictures, she has a trained eye that I don't. Many of the photos I'm posting from this trip are her work, and I'm grateful to have them.

We passed most of our day passing - cars, motorhomes, and the occasional bicyclist. I rode ahead, winding up the engine to get around slow vehicles in small spaces, enjoying the few wide-open miles I found but spending a huge amount of my day frustratedly stuck. The parkway was busier than it had been in August, and I didn't like the changed conditions.

One roadside stop promised a waterfall, but once we had parked, the sign said it was over a mile hike away. We unpacked our meatloaf sandwiches and ate them in the seats of a small amphitheatre. The air had a chill, but not a threatening one, and both walking and riding were pleasant. The sandwiches, the only home-made food we'd had while traveling, were delicious. 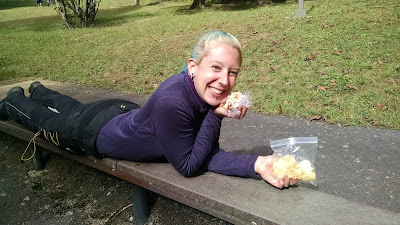