The ride out to Thousand Trails campground south of Dallas was nice. We got to leave I35, which is a terrible riding road, and go tearing through the countryside on Farm to Market Road 933. Somehow I didn't remember ever running into that naming convention before; it's abbreviated FM933, but Robot Lady in the GPS announces the entire thing, as though she expects we're pulling a trailer full of cattle.

We found Thousand Trails campground at sunset. I picked a site, dismounted, and realized there wasn't much place to put a tent. I picked another site and went to put the bike there, but on the way, found a third site that was the best yet. We parked, unpacked, set up home, and made dinner. Rogue took a few pictures, in one of which my face mysteriously disappeared. 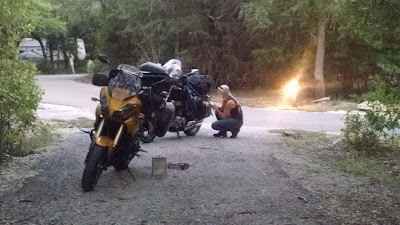 We got very lost walking to the bathhouse, but when we eventually found it, it was air-conditioned and spotlessly clean. Our site was actually close to it; we had walked the wrong way around the circle and made the journey longer than necessary. The air was warm, and there were coyotes howling around us as we turned in for the night. It was nice to hear wildlife, but I made sure my mace was handy just in case.

Around 2am, I was dreaming that Rogue and I were listening to someone talk and she started laughing inappropriately. I was puzzled by her response until I woke up in the tent and realized she was actually not laughing at all but caught in a nightmare. I woke her, and then we lay there for two hours unable to go back to sleep.

There was a light in the road that shone directly at the tent, making the walls glow slightly. The light blinked out as a shadow moved over the tent, then reappeared. Our conversation paused for a moment as we waited for further activity, but nothing happened. 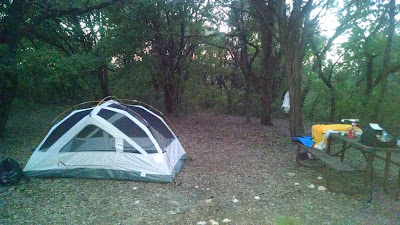 "And I'd go," I said, "If we weren't vising Randy in the morning. Dropping in on him at 4am might be kinda rude. Hey, wake up, it's breakfast time!"

Eventually we drifted off to sleep again and woke at daylight. After the usual packing scurries, we were back on I35 toward Dallas. We were actually lined up to be early, until I stopped at a gas station because my shield was so bug-spattered I couldn't see. Then Rogue said her luggage was slipping, and when I checked the straps I found that one of the D-rings had broken. I finagled a new solution and we rolled out of the parking lot and up to a stop sign. When I looked in my mirror 15 seconds later, Rogue wasn't there.

I pulled over and waited, but after a couple of minutes, she still hadn't appeared. I was in the middle of the on-ramp to I35, but turning around there would be less dangerous than doing it on the highway, so I walked Bee through a three-pointer and headed back. I found Rogue and Hades parked on the side of the road.

"The bag slipped when I pulled out," she explained. "I almost dropped the bike."

I parked Bee in the entrance to a restaurant and went to take another look. I was kneeling at the back wheel when a tractor trailer rolled by with inches to spare.

We got the bikes situated a little more safely and then did a thorough retooling of all the straps on the luggage. The cinch strap got tightened and the two straps with parachute clips were crossed for greater security. When I'd done what I could, I ear-boxed the luggage a few times to make sure it stayed.

That seemed to do the job. An hour later we had dropped our stands in Dallas, and Randy was bringing us to an adorable diner.

Rogue and Randy got along like a house on fire. I cuddled my coffee while they chattered, and enjoyed the satisfaction that comes from helping form a new friendship. Back at his house, Randy invited us to stay for a while, but we had to be getting on. Our day's goal as written was to make the southern end of the Natchez Trace Parkway, but I was actually hoping to get some of it done before making camp in the interest of shortening up our drive the following day.
Posted by Skipper at 18:27