On Friday night there was a wine and cheese tasting, but the cheese was a lie, so we didn't stay long. I did meet a retired gentleman in a leather stetson who was a member of the Thin Blue Line police motorcycle club, who spent quite a bit of time explaining why there's debate over whether female officers should be allowed to join. From what I understood, the wives of the male officers don't want their husbands fraternizing that much with the female officers. The irony is that the wives are allowed in the club as honorary members.

Rogue was approached by a woman with her same hairstyle and startlingly similar overall appearance. On our way outside as the event cleared, we ran into another woman from Mass. She hadn't ridden in, but she was a long-time rider who enjoyed dirt bikes, which was refreshing. 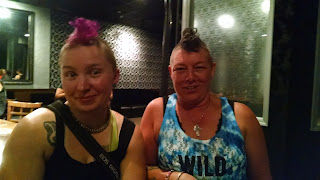 The crowd as we got to know more of them turned out to be overwhelmingly Harley owners. They were all perfectly nice and we made a lot of friends; it's not a negative comment, but it wasn't what we were expecting. I saw exactly three adventure bikes over the entire weekend, and one of them was mine. There were a handful of sport bikes, including a couple of GSXRs and at least three Hayabusas. But the largest contingents by far were the cruisers and the Spyders. I had the only Triumph in the entire place, and I'm pretty sure Hades was the oldest machine by twenty years.

I'd been looking forward to meeting more people like us, but we were an anomaly even among a thousand lady bikers. When we returned to Beaux Jangles' lawn, two other tents had appeared, belonging to a couple of women on pretty Harleys. There was also a bike trailer; the bikes had been parked beside it and the trailer filled with pillows and other bedding. Apparently my seat-of-the-pants camping style was going to work as well as ever. We could have brought a motorhome and still had room to spare.

The four of us with tents commiserated over our expectation that our group would be much larger. Everyone else had either stayed with friends or gotten hotel rooms, and we were puzzled. I've realized that even people who motorcycle and people who camp are often mystified by the combination of the two.

There was one guy at the wine tasting who was also a new rider, and was so blown away by the entire concept of our adventure that he looked like I had smacked him in the face. He didn't seem to believe my words, so I pulled out my phone and showed him pictures of the loaded bikes, the campsites, and the stove.

"You look like such innocent little girls," he said, and we laughed. From most other people I would've been annoyed by his attitude, but there was something about him that was utterly inoffensive, a kind of innocent wonder that lacked the grating judgment wielded by so many adults.

"Hey!" he turned in his seat and called to friends across the room. "Come here, Scott. You wanna feel small? Check out what these girls are doing."

We repeated our mission statement to Scott and his lady companion, who seemed impressed.

Jimmy had started riding around the same time that Rogue did, and he was on an Indian Scout with what seemed to be the only tan leather seat in the whole crowd. After getting over his initial shock that girls, bikes, and camping can all be facets of one person, he said, "You know what? If you can do it, I bet I can do it."

"Totally!" we encouraged him. I love watching the light of a new adventure spark in a person's eyes. "Get a tent, get a map, go!"