It was 40 degrees when we woke up at 5:30 on Monday morning. I made coffee and breakfast while we loaded the bikes and layered on long underwear, hoodies, and gear. When the gear was bungeed and the zippers were zipped, I pumped my fist and we started our engines. Well, Rogue did. I pressed Bee's starter and listened in disappointment while she cranked and then died with a whining noise.

That's a standard feature of the Bumblebee, but she did it so many times that eventually the battery died. We had jumper cables in hand (thank you, Cider) but I had to remove all of my luggage and the seat to get to the battery. Once we hooked her up, the starter stopped working entirely.

Two hours later, I had found a blown fuse, traveled to the auto parts store, replaced the offending part, successfully jumped the bike, packed a whole kit of fuses into the last inkling of space in my luggage, reloaded and strapped everything, and was actually able to roll out of the driveway. We rolled straight back to the car store so I could get a portable jump pack and some oil. 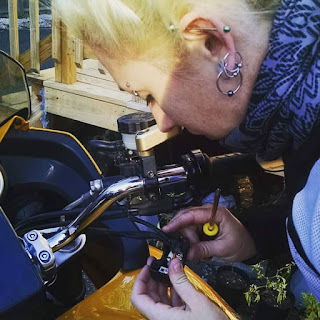 Out in the parking lot, I pulled the dipstick and poured oil all over the engine bars and the ground, because the bottle was a wide-mouth and the filler was not. Rogue went inside for paper towels and a funnel while I looked for a clean patch of asphalt on which to park the dipstick. Not finding one, I decided to prop it in the mouth of the oil bottle, but I didn't double-check my plan first. The dipstick dropped into the bottle with a bloop, and I stared after it in vague horror.

"Rogue," I said when she reappeared. "Guess what I've done now."

"Guess where the dipstick is."

She looked around - at the bike, at the ground, at me. "Where is it?" she asked. "Skipper, where is the dipstick?!"

I couldn't talk; I just pointed at the bottle of oil. The two of us sat on the ground, and I rested my forehead against Bee and cried with laughter. Eventually Rogue fished out the dipstick with a hook pick from Hades' tool bag, and we were really on our way.
Posted by Skipper at 22:53