Lace, Grace, and Gears: the Rally 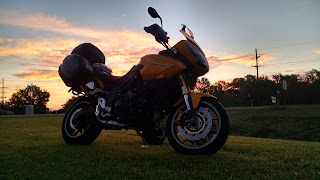 Our first morning in Texas was warm but dewey; the tent and the bikes were dripping. We put on jackets and headed to the airport where the parade was staging. The agenda said that KSU (kickstands up) would be promptly at 9am; around 9:15 the leaders actually started moving, and Rogue and I, somewhere up in the 500s in line, rolled out around 9:40. There was a lot to look at, but they asked us to stay on our bikes, so I tried to get comfortable. 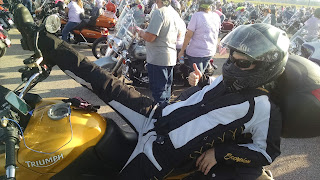 The "parade" was really a ride, which was great by me. Actual parade speed is brutal on bikes. We strolled about 60 miles in total, south out of Beaumont and back again, grouped into sections of a hundred or so riders. Our procession was led by a road guard on a Spyder.

I was a little surprised when we entered highway 10 and discovered that the police had actually shut down the interstate for us. Cars were stopped just before the entrance ramp, and a cop was waving us on with a grin. As we processed, we found some groups of people on the side of the road, waving and taking pictures. At major intersections there were more cops, and all of them waved happily at the biker parade.

Our goal was to break the world record for the number of lady bikers together in one place at one time. That record was 1,002, set in Australia. At a final total of 806 ladies on 624 bikes, we didn't quite get there, but we did set a new US record. 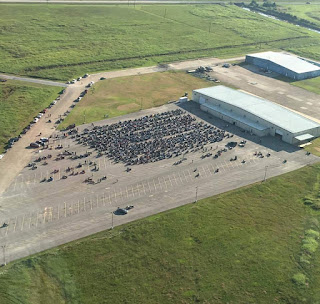 We got crawfish etoufee for lunch from a food truck, followed by beignets, which coated us thoroughly in powdered sugar. Full of fried food, we headed to the open space in the parking lot, where a large man wearing the biggest sun hat I've ever seen was running bike games. There was a slow race (who can ride the slowest without putting their feet down), a keg roll, a challenge for passengers to retrieve and then replace tennis balls from the tops of cones, and a weenie bite (the passenger has to eat a hot dog hanging from a string while the bike is moving). 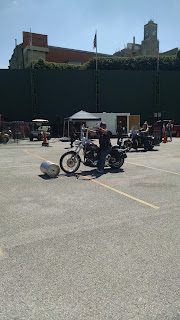 Rogue and I participated in the road kill challenge, I driving Bee and she riding backpack. They scattered some stuffed animals on the ground, and she was handed a butterfly net and told to pick up as many as possible. We didn't do well, scoring only one catch because I ran most of the animals over rather than rolling along beside them. It was worth it just for the laugh, though. And to hear a man near the entrance tell me, "You have one of the nicest-looking bikes here."

At 4pm we wandered back to the stage as promised. I bought some pulled-pork sliders and we were about to dig in when the emcee asked for Rogue. She headed for the stage and I followed with my camera out, leaving the sandwiches in the guardianship of a potted tree.

"Rogue here learned to ride two months ago," Sunhat announced over the microphone, while Rogue grinned and looked awkward. "And then she rode here, from Massachusetts, 1,700 miles in four days. Can anybody beat that?" 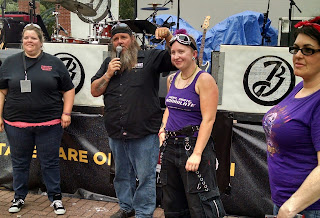 One woman came up and said she was from Michigan, but when questioned about her route, said that she had taken "the long way." Sunhat, who had lost the hat by that time, waved her away. No other challengers appeared, so Rogue was crowned the Longest Distance Rider and given an adorable handmade replica of a motorcycle, about eight inches from tip to tail and intricately detailed. Both of our first thoughts were, How is that going to get home?
Posted by Skipper at 23:00