Interstate 20 is pretty decent riding, and we sailed out of Texas and into Shreveport in good time. My GPS pointed me south, but when it told me to continue that way for 116 miles, I had to question its motives. I pulled off a glove and poked around until I had a wide-view map, then got my arm tangled in my audio cord and nearly lost my amplifier. At that point I did what I should've done in the first place and took an exit.

In my initial planning I'd failed to notice, probably because I hadn't actually mapped it all out, that Natchez, Mississippi is significantly south of Dallas, Texas. A glance at the map told me that I20 would take us straight to Jackson, and my memory contained the information that the Trace also runs through the capital city. I made an executive decision, knowing Rogue wouldn't object, and got back on 45 going north. We rejoined 20 east and continued across Louisiana.

At the next gas stop, I explained that we'd be cutting off about 100 miles of the Trace and shortening our drive to Nashville significantly. I assured Rogue that the southern 100 don't contain anything unique to the northern 344, and she said a shorter drive sounded like a great plan.

There were huge numbers of things on the road that both of us wanted to see. Rogue was learning the lesson I learned last year, that making miles negates your ability to see much of anything interesting. I felt bad for both of us that we had to skip so many cool sights, but I'd promised her that we could stop at the Mississippi River.

Our timing couldn't have been better. We hit the bridge at sunset and rolled along over the water in a cloudy pink haze. At the far shore, I took the exit and went bombing into the visitor center's parking lot. We dropped stands and jogged up the stairs to the pedestrian overpass, arriving just in time to see a glowing orange sun sink into a sea of pink and gold lava. 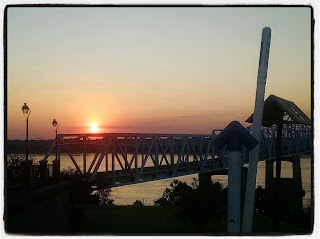 We arrived in Jackson well after dark, and then I experienced an odd delayed triumph when we made camp for the night in a campground that I'd failed to find on my own the previous year. We drove by the parking lot where I'd given up and turned around, and less than a mile later turned down the road for the campground.

The place was big, and full. After doing a very long loop over steep gravelly roads, I found one unoccupied site.

"I keep waiting for someone to come tell us to leave," Rogue said as she rolled out the tent. "That stupid place in Baton Rouge has me all paranoid."

No one seemed to be awake, though. A sign above the sink in the bathhouse read, "ALCOHOL CONSUMPTION AND DISORDERLY CONDUCT." A couple of words printed in red ink had long since faded into illegibility.

"I can follow instructions," I said, but in fact I couldn't, because I had no alcohol. The excessively-numbered spiders under the sink didn't offer me any; maybe they were worried about being caught by the video camera over the front door. Another sign over the toilet threatened that the bathroom would be "locked and not re-opened" if the non-flushing incidents continued. Rogue and I agreed to vacate the area before the office opened in the morning. Videotape my rear end.
Posted by Skipper at 19:56