Somewhere in Pennsylvania the sky clouded over and it started to rain. Rogue applied the old rain suit I'd given her, then decided it billowed too much to be worth the effort and took it off again. We stopped at a hardware store for white gas for the stove, and then a Target for dinner supplies.

"I don't know if it's my riding skills or the bike," Rogue said, "But I'm sliding all over the road. I literally slid sideways through that stop sign back there."

"That's not you," I said. "That's definitely the bike." Back in July, I'd gotten oil on the back tire during a rain storm and almost slid through a busy intersection. I thought we'd collectively done enough dry riding to clean the tire, but apparently not.

"I'm really not okay with this," she said, and I agreed and hunted down a nearby campsite. We were only 50 miles short of the day's goal anyway, and an oily back tire on wet roads is no joke. Harrisburg East Campground was the closest, and we rode slowly to it.

I knew as soon as we rolled in and saw an adorable lodge and a pool that it was going to be expensive. At $40 for a single night in a tent site, it was more than I'd ever paid for camping, but an intact Rogue and Hades were worth it. We parked the bikes in the woods, as the tent sites didn't have driveways, then got a bundle of firewood. I mucked with the fire pit while Rogue remembered how to set up the tent. 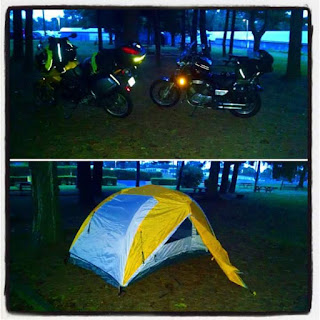 It wasn't long before we had a cozy bedroom under a tree and steaming bowls of soup and Rice-a-Roni on the picnic table. The rain had paused long enough for us to enjoy the fire. Rogue went to take a shower and came back with a report of a beautiful bathroom and fifteen minutes (timed) of hot water in the shower. I was definitely impressed with the shower house; it was big, clean, and well-lit, and the water was hot enough to take most of the knots out of my back. It didn't rain again until we were zipped into the tent, and from the cozy insides of our sleeping bags, we didn't care. 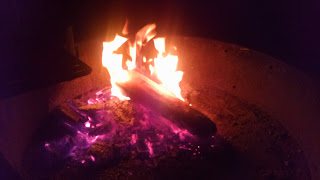