The Springs of Orlando

Staying with locals is a great way to get an inside view of a city. My only previous experience with Orlando was a tour of Full Sail University when I was college-shopping at age 17. Tyson took us to Universal Springs one evening after the kids went to bed, and we wandered around the pond and through the chocolate shop.

Disney is like a foreign language to me, but I got my amusement from watching Rogue. She bounced and squealed like a kid in a candy shop, possibly because she is a kid and we were in a candy shop. She and Tyson nerded out about Disney lore and movie history while I admired the decor and the fountain. And of course there was Bumblebee everywhere.

On Friday we went to Disney Springs and stopped by the Cirque building to watch the trapeze artists working out. Two days a week they open the theater to observers during a practice session; it's not a performance, but it's free, and it's fascinating in a different way than watching a choreographed show. Afterward we went for a drink and a snack at the House of Blues while we waited for Tyson and family.

Over tater tots that were more like nachos for all the cheese and other accessories thrown over them, we admitted that we were both having doubts about the shenanigans we'd gotten ourselves into.

It occurred to me to do this in the first place, this homeless-on-a-motorcycle thing, because at the end of all my previous long bike trips I haven't wanted to come home. So why not just call it off and never come home? Get rid of the "home" thing and the "job" thing; problem solved. 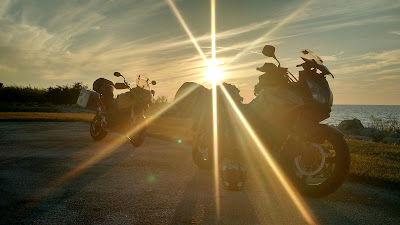 But when there's no end date in site, no crash pad to huddle up in, and no source of steady money, one important things changes: the worries come along for the ride in a way that they normally don't. I had some cash saved up, but when Bee decided to need a glut of new parts in the first two weeks of January, she gobbled up a large chunk of it. What I have left is unimpressive at best, and Rogue is in a similar situation. We were planning to find work on the road but we have to leave Florida again in a few days to head back to Philly, so we can't doing anything that requires more than a few days.

What's getting us by right now is mystery shopping. I can't go into too much detail because that could ruin the "mystery" part, but we contract with a bunch of companies who reimburse us to eat at certain places (and have other customer service interactions) and give feedback on our experiences. We've had several nice meals and expensive drinks as part of the business, and it's great. 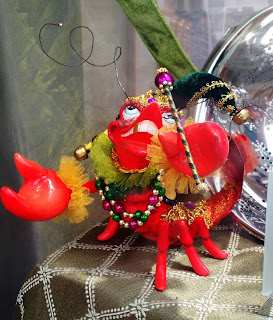 When Tyson, Jessie, and their three adorable kids showed up, we took a walk down the shopping trail and through the Coca-Cola museum. It was chilly, and I lent my armored jacket to Braeleigh, who wore it like a dress. I wish I'd gotten a picture; it came most of the way to her ankles and probably could've gone around her twice.

There was a rap battle going on outside the museum, a host of awesome geeky and arty shops to browse through, and eventually a large order of Chinese takeout back at the house. We failed to get pictures of the group of us, but we'll be back that way soon to remedy the situation.
Posted by Skipper at 13:09