The new chain arrived on Tuesday as promised. Charleston Powersports was able to fit Bee into their schedule, and late in the afternoon I rolled onto 526 with a shiny new chain and sprockets. She was so smooth, and so quiet - no more crunching, grinding, threatening sounds to make me question every second of my ride.

We went back to Honey Hill that night because it was close by. With plenty of water in tow, it was a lovely evening, and the owls sang us to sleep.


Unfortunately I was awake again at o-dark-thirty, and I stayed that way for some three hours. I'd slept too late to have gone to bed so early; the mix of sleeping in a house and sleeping outside was messing with my schedule. The owls returned for a while to keep me company, at one point gathering together quite nearby for a brief town hall. Three or four of them made the hooting noise that probably plays in your mind when you think about an owl, and the last one seemed to be cackling.

Winter glances at South Carolina but doesn't really pay it much attention. When we woke for real, it was about 45 degrees and the sun was prodding its way under the tarp. The tent fly had been hung over the lantern hook the night before to dry, and we'd draped the tarp over the tent in its place. It was better than nothing, but not as large as the fly, and let in a steady cool breeze overnight.

I enjoyed the slight chill in the air, grateful that it wasn't snowy and freezing. We were packed and rolling by 9:30, and when I set the GPS, I got a surprise. When it came down to it I couldn't remember why, but I'd been convinced that our day's ride was 300 miles. It was actually 450, so it was a good thing we hadn't slept any later.

Those 450 miles were glorious. The day grew warmer as we made southerly progress, peaking at about 80 degrees. At a gas stop in Georgia, we had lunch at Polly's BBQ, which was actually in a gas station. The pulled pork sandwich and pork stew with corn were amazing. The Georgia Peach stand next door, a grocery store devoted entirely to peach-related food and drink, begged me to spend money. The lack of space in my luggage saved my wallet. I did manage to fit a loaf of peach bread under a cargo net on my left pannier, but the jams and wines and canned cobblers stayed on the shelf. 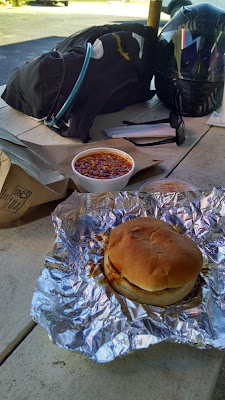 Just as full dark was arriving, we pulled into the driveway of our friends Tyson and Jessie. Tyson warned us that if our bikes were so much as breathing on the sidewalk, we'd be fined, so we set about the task of Tetris-ing two cars and two loaded bikes into the driveway. I spotted a sidewalk running along the edge of the house, and suggested I park Bee there.

It seemed simple enough, but I misjudged the height of the small strip of concrete in relation to the grass. My first attempt sent us rolling backwards, and I nearly dumped her but managed to save it. At that point I probably should have rethought my strategy, but instead I just tried again with more vigor. Of course that resulted in Bee on her side in the grass.

Rogue, Tyson and I managed to upright her, and no damage was done. Jessie suggested I make a run at the sidewalk from a different angle, and that went off without a hitch. We squeezed Zee in behind her and called it a success.
Posted by Skipper at 23:35