When I bought Bee, she came with Triumph side panniers and a Coocase top box. Considered "day sized," they did the job until it was time to actually move onto the bike. 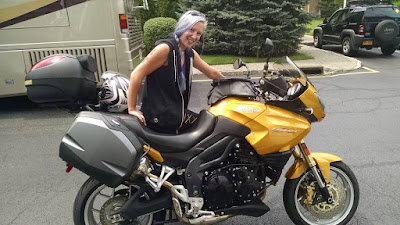 There weren't a whole lot of options for luggage that would fit my Tiger 1050; the newer 800XC is the more popular adventuring model, but Touratech had a couple of options. The Zega Pro pannier kit is modular, so that if one part of the box gets damaged, you need only replace that one part. For a difference of several hundred dollars, though, I was happy to go with the Zega Mundo, which are solid aluminum boxes that don't come apart.

When I had most of the bolts out, I discovered that the rear mount was actually broken. One of the feet that bolts vertically into the frame had snapped off. I didn't have time to replace it, so I just shoved it back together and hoped it wasn't too important.

The Zega mounts didn't play very nicely with the Coocase mount, but after 20 minutes of shoving and cursing while Rogue held up the platform for me, we got it cobbled together. The right Zega strut and one corner of the box touch the exhaust can, but not hard enough to leave a mark. There's one bolt missing that just utterly refused to fit, but it doesn't seem to have been an issue, as there are three more on that side and four on the other.

The boxes themselves are pretty great. I had to install the locks myself, which is a puzzling way to offer luggage - why wouldn't you want locks? - but they went in easily enough. I dented one of the boxes when I dropped the bike in Orlando, but it's not visible unless you're peering through the frame. 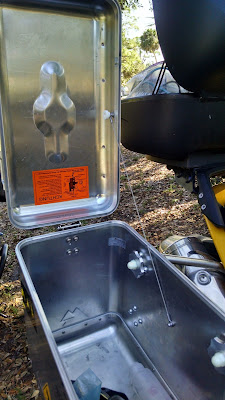 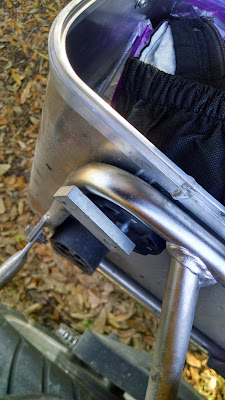 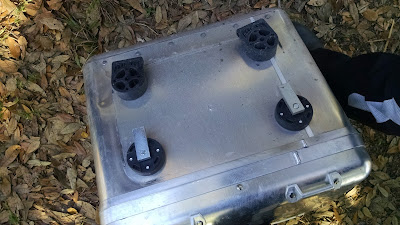 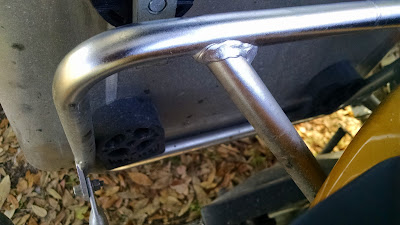 Pros:
•Relatively inexpensive - two side boxes, locks, and mounting kit cost ~$1100
•Waterproof - the lids seal well into the bodies and don't leak
•Sturdy - dropped the bike fully loaded and only suffered a small dent
•Dual hinged - can open the box from the front or back, and the other latch acts as a hinge
•Removable lids - open both latches and the lid comes off to be a tray, seat, cutting board, or improvised corporal-punishment device
•Tie-downs - each lid has four tie-down points. They'd be better if there was another millimeter of space between the bar and the lid, because any bungee cord or cargo net with coated hooks doesn't fit. 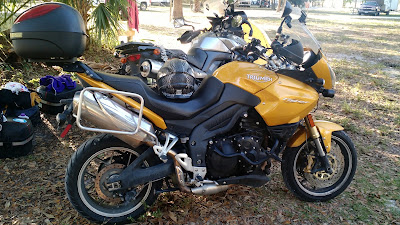 Cons:
•Difficult to install, at least if you're mixing manufacturers. Might have been easier had I bought a Zega top box system, but I already had the Coocase. The instructions are also awful, written in poorly-translated German with grainy grey photos that show nothing useful. The parts are unlabeled, so you figure out for yourself which bracket is left and which is right.
•Box mounting system - you have to open the box and leave the lid open or off while you screw the boxes onto the struts. They're secure, since you can lock the lid shut, but they can't be completely full while you operate the hand cranks. Those cranks also take up a bit of space in the box. I prefer the mounting system for the BMW GS panniers, which is keyed and operated from outside the box. 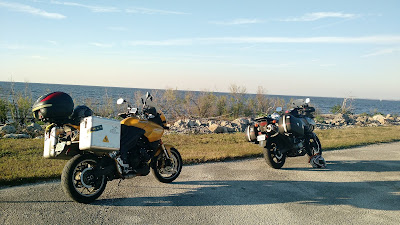 Overall I'm pretty happy with this system. These boxes will store a lot of stuff, take a good beating, keep the water out, and provide a great place for my growing sticker collection.
Posted by Skipper at 12:39