Cities are fun in their own way, but they're not much fun to drive in. The Motorcycle Roads website offered up a scenic route around northwest Orlando, and after Saturday morning at Donut King (maple bacon donut!) with the kids, we geared up and headed out to see some sights.

At a stop light in Mount Dora, I glanced to my right and saw a giant sign for a steampunk show. I gestured at it, and Rogue nodded. We eased into the turning lane and parked on the grass under a large tree. 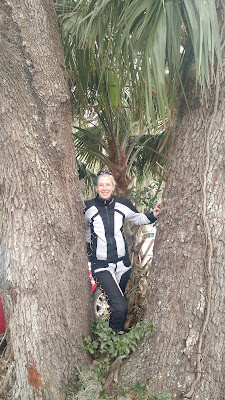 "Why is everyone dressed up?" Rogue wondered as we walked down the hill.

"I'd have dressed up for a steampunk convention if I knew there was one," I answered, puzzled. "Wouldn't you?"

"Oh, there's that too," I said, pointing up the hill. "But down here, there's steampunk."

"I missed that completely."

It was mostly vendors and one pretty awful band on an outdoor stage. The crowd was a mix of convention-goers and flea-market shoppers. Between the convention and the permanent flea, which had absolutely every product imaginable, from local honey to shoes to plants to bicycles to wood sculptures to henna tattoos to hookahs to puppies, we spent a couple of hours just walking and photographing. 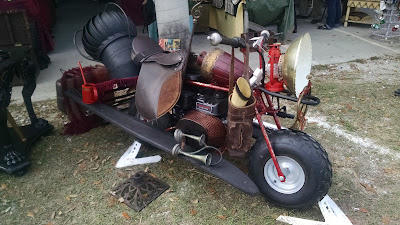 The guy doing the chainsaw wood sculptures had a 1970's Yamaha bike with a homemade trailer and was living in a converted box truck, with its own trailer that held his carving equipment and the motorcycle. We chattered about road life and he showed us his home on wheels. He shared a story about a time that he ran out of gas and was picked up by a helpful stranger. When this stranger found out that our wood-carving friend was a Christian, his response was to unplug the spark wires on his Yamaha before driving away. Fortunately the biker knew his machine well enough to find the problem when it didn't start, but he left with the knowledge that the world contained one more strange asshole.

From the convention/flea we wandered into downtown Mount Dora, and found an adorable town reminiscent of Cape Cod. There was a small harbor offering lake tours, an upstairs coffee shop that was clearly a converted home, and shops full of spices and teas and ice cream and art. There was a wine cellar with a small, homey bar, where we met a couple of bikers who invited us to return for a town-wide art show the following weekend. 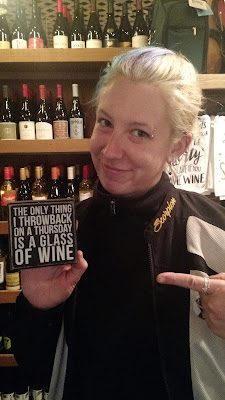