February 7th was my birthday (the last one at which I am still not 30, if you wondered). Rogue took me to a movie, the new Xander Cage Triple X, and it was everything we hoped: completely ridiculous, cheesy, impossible, and awesome. I've been a big fan of the original Triple X* since it came out, and the sequel didn't disappoint.

On my actual birthday we wandered into Jupiter, where I got a free bagel from Einstein Brothers (you can get one too if you join their email club; this was not birthday specific). Searching the TripAdvisor app for things to do in the area turned up something called Manatee Lagoon, and off we went. 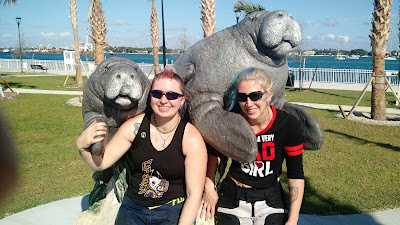 The Lagoon is part of Florida Power and Light. There's a free museum with information about manatees and a cute little garden out front. FPL releases warm water from their steam cooling system into the bay, and the manatees are attracted to it in winter, because they don't survive well in cold water. There's a viewing deck above the area of warm water, and it was full of barracuda and triggerfish and a small handful of manatees. We saw four or five, which was quite exciting to us, although someone told us that when the water is really cold they can actually pile up in FPL's little square by the hundreds. 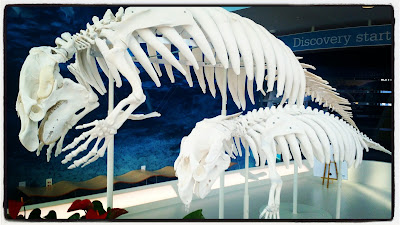 Another search of TripAdvisor turned up something called Northwood Village, which purported to be a artsy district with galleries and shops. A short ride dropped us right in the middle, and we walked around with increasing puzzlement. 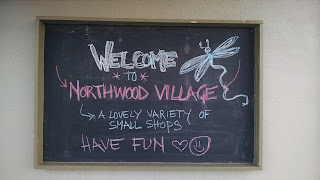 There was some art, and there were some shops, but almost everything was closed, and the place had a strangely creepy feel. The website told me that the area was undergoing a renaissance, and reality said that the change was recent and still a struggle. Rogue compared it to Holyoke trying to become Northampton. 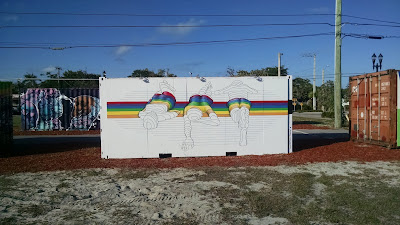 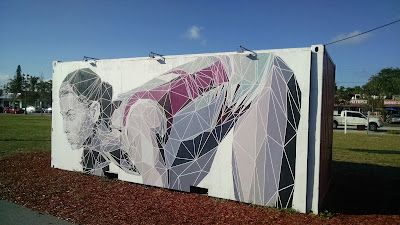 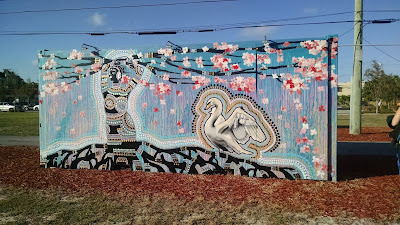 When we returned to camp for the night, our neighbors had a roaring fire that consisted of one large palmetto stump. They allowed us to cook our hot dogs there, and we ended up staying a couple of hours and chatting about life. They're a band of roving antiquers from all over the country who wander around buying and selling interesting things.

Campgrounds contain an amazing selection of people. We've met fellow bikers, retirees, parents with kids, birders, and one drunken asshat who woke us up by hollering obscenities four nights running. He's still sharing a campground with us, and I'm sleeping with my harmonica under my pillow. I hope I don't have to use it, but if it's a question of self-defense, I'll do what must be done.
Posted by Skipper at 12:55

Email ThisBlogThis!Share to TwitterShare to FacebookShare to Pinterest
Labels: art