DuPuis had begun to feel like home, and leaving wasn't high on our list of desires; but we had a date to make in Philadelphia, so northward we went. Our first stop was another visit with Jessie and Tyson in Orlando. It was a bit more hurried this time, as we were back on a schedule and only had the one night.

I'd had some things mailed to their address, and was happy to find that along with a new rain suit and replacement cell phone, at long last I had all the correct and necessary parts to furnish Bee with a tank bag. 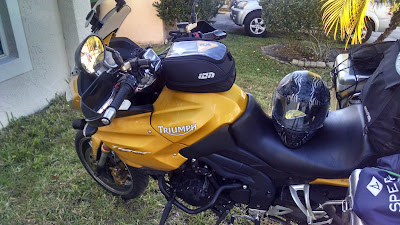 She came with one, but I stupidly forgot to reattach it one day after a gas stop, and it flew off and was never seen again. This was maybe a week after I got her, so I've been without for quite a while.

My uncle kindly got me a new one for Christmas, but the first one I ordered was the wrong kind for the tank ring that was already mounted on the bike. By the time I realized the mistake we were on our way out the door, so my mom mailed the incorrect one back and I had the correct one mailed to Tyson. It was waiting for me when we arrived in Orlando the first time, but had come without mounting hardware. That arrived while we were in south Florida, and I have to give credit to Twisted Throttle - even though they screwed up with the hardware, their customer service was excellent. They responded to all my emails immediately and overnighted me the new bag. I'd buy from them again with no hesitation.

Some assembly is required on these tank-ring bags, but fortunately Tyson had a drill. 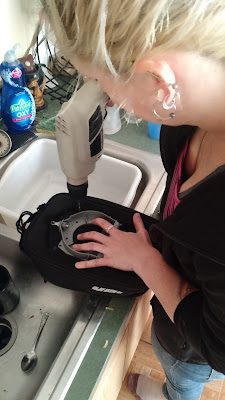 I like the Ion bag, small though it is. It was mildly irritating to have to do construction on it to get it working, but the overall tank-ring system is clever. The bag doesn't touch the bike and thus can't damage the paint like magnet-mounted bags. The top has a clear pocket for maps (I tried to put the GPS in there but couldn't read it), and it comes with a neat little rain cover that's also clear on top. A handle on one end allows for easy carrying when I walk away from the bike.

I had to move all my bar-mounted gadgets around to accommodate it, but I'm very glad to no longer be using a shopping bag and a cargo net as my tank bag.
Posted by Skipper at 20:14